Awakening Of A Soul Keeper – Prequel to the Soul Keeper Series by Brienne Dubh
My rating: 5 of 5 stars

Awakening of a Soul Keeper- Prequel to the Soul Keeper Series
By Brienne Dubh
Rated 5 stars!

Wow! What a great beginning to a new series! I was drawn in by the lure of a sweet vampire story. Then the characters became alive and i could hardly put this down. The story is unlike any other I have read. All because of Sam. He is the husband to the Soul Keeper. Every twist and turn I wanted to see what would happen to Sam or Theodora or even Lyzander next. I read this fairly quickly and I can not wait for the next one to come out!

This is a first time author for me. It was beautifully written and full of intrigue. Just enough Info given to keep me on the edge…begging for more. The story was different (meaning who ever heard of a third wheel on a vampires mate??) but well done. The characters were sassy, bossy and strong. I loved it all! So so glad I picked up this book on a whim! 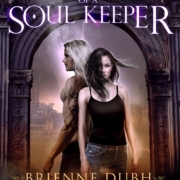 What happens when you meet the man of your dreams, then meet your soul mate and find out he is a thing of nightmares?

Theodora is thrust into a world of powerful beings and surrounded by treachery, lies and violence, when she accidentally discovers not only is her husband’s boss a vampire, but she is also his soul keeper and fated mate.

As the leader of all vampires the last thing Lyzander needs or wants is his soul. With so much on the line he can’t afford to be anything but vengeful and Theodora’s presence jeopardizes everything he is.

Forced to stick close to her unwanted mate, Theodora struggles to keep hold of her sanity and her marriage as she discovers who and what she really is.

Brienne Dubh comes from a performing background with over 10 years acting experience. Studying performing arts and theater at college she then went on to university where she studied creative arts. Brienne has worked as a producer working on various film projects before going on to set up her own production company.

In 2010 Brienne took a step back from producing realizing that her passion for writing was taking over. With experience of both production and post production processes, she is a trained video editor and has also written and produced several short film scripts, one of which premiered at the Corona Cork film festival. Originally from England, after a few years of travelling the world Brienne moved to Ireland where she currently lives on a homestead with her husband, 2 young daughters, 10 chickens, and a cat named Tilly. Brienne now spend her days coming up with imaginative stories where you can escape everyday life. Whether you are looking for dark and twisted, humorous or romantic and sexy, with Brienne’s books there is something for everyone to lose themselves in.