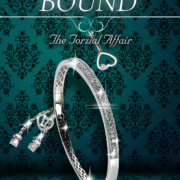 Jenny’s outward display of strength is in direct contrast to her inner turmoil, and the real-life struggles she is forced to face. Is she strong enough to deal with not knowing when and where the next threat in what seems a never-ending string will come? Will the uncertainty of who to trust lead to an early death or a lifetime of incarceration?

Is it too much for a man who struggles with commitment? Can Brian truly protect her? Will Jenny be able to fully submit to Brian’s dominance, allowing him to take the reins in life as well as the bedroom?

Bound is the second book in the Torzial Affair series by Via Mari and the suspense doesn’t let up in this book. We learn so much more about Jenny and how her time with Ty was not a good thing.

Jenny just can’t seem to catch a break, she is dealing with one thing after another. How she is able to come through without being a hot mess I have no idea. Any one of those things would have left me a blubbering pile of tears.

Brian finally grows up! He exerts his dominance over Jenny and all of the messed situations they are all going through.

I’m dying to see how it ends and if Brian and Jenny find happiness.

This is book 2 in the Torzial Affair series. Jenny and Brian are back right where book one left off and things get steamier, secondary characters get sneakier, and everyone’s trust gets tested.

We all know Jenny suffered at the hands of Ty. Now that Ty is dead you would think that Jenny’s life would be a little easier, but no, apparently the police seem to think that Jenny has killed Ty and Mari has to throw in a few more twists to test both Jenny and Brain.

I liked this book better than the first and can’t wait to see where book 3 takes us!

This is book 2 of a trilogy and should not be read as a stand-alone.

Often times the second book of a trilogy is the weakest. A book that connects the first and third and is mainly filler. That is NOT the case with BOUND!!!!

Told in a dual point of view, this story takes us on a rollercoaster of emotion and energy. There is so much I would like to say about the story, but I don’t want to give anything away.

I will simply say… Read this book, it’s good!!

This is the second book of the series and it was just as amazing as the first installment. It really had me captivated i was completely pulled into the pages i was eager to read on, just couldn’t set it down . It had enough action and drama to keep me on my toes and also had me laughing/smiling at times too. I’m eager to read more from this author, can’t wait to be taken on another emotional rollercoaster!!

Bound (The Torzial Affair Book 2) by Via Mari is the second book in the Torzial Affair series and you really need to read book 1 to understand this book. It’s the story of Jenny Torzial & Brian Carrington, who we met in Book 1. Jenny is a successful business woman, sexy, independent woman and Brian owns a major company and is used to women only wanting him for his money and title. Jenny and Brian are just getting to know each other and really have feelings for each other when Jenny is accused of killing her ex Ty. Ty had ties to the Mafia so they are after Jenny as well. Brian is doing everything he can to keep Jenny from spending the rest of her life in jail but money can’t buy everything. He’s also being told that Jenny is just like all the other girls and just wants him for his money. Will Jenny be found guilty of murder or will she be found innocent. Will Brian let down his guard enough to trust that Jenny really cares about him or will he believe all the lies being told about her. It’s such a good series and each book gets better. I can’t wait for the 3rd!

Bound (The Torzial Affair book 2) by Via Mari
5 stars

Well what can I say about this author I haven’t said in previous reviews of her other books! Each book is better than the last and that’s saying so much.
I was on a merry go round of emotions!
I absolutely love this series and the characters.
I highly, highly recommend this series and really anything written by this author!

Bound is book two in the Torzial Affair series by Via Mari. The story of Jenny and Brian continues in this action filled, dramatic saga. This style of writing is very addictive and I found it quite hard to get anything done, other than to keep reading!

There is always so much going on in a Via Mari novel, but not too much that it is hard to keep up with the story. The plot is easy to follow, but also intensely mysterious. Many twists make this story unputdownable. It had a way of creeping past your defences and captivating you until you are at the last word of the book. A total escape from reality. Bound is a tale to immerse yourself into with wild abandon. Ever the entertainer, always pages upon pages of intrigue. 4 stars.

Bound (The Torzial Affair book 2)
By Via Mari

Bound is book two in the Torzial Affair series by Via Mari. I have to say if you are looking for a new favorite author look no further than Via Mari, you won’t be disappointed. I just love the characters of Jenny and Brian. We find Jenny is struggling after being raped, but with the lovely Brian there could be a light at the end of the dark tunnel Jenny find her life in. There is not a character in Bound that you aren’t going to like. Via has written this book as well as the first and there is no way I am going to say which one is better. The characters seem to bounce off each other which in my opinion makes for an awesome read. I do highly recommend you start with book one as it’s a brilliant way of getting background history. So, go get books one and two and settle in for two great books.

Bound, The Torzial Affair Series Book Two, by Via Mari

Jenny is accused of murdering her ex and is thrown into a heated dispute between mafia groups. This novel picks up right where book one ended and continues the story. I felt that this second book had more detail and action in it than the first book. The characters still moved around a lot but due to the circumstances with Jenny, it was understandable. I felt that Jenny and Brian’s characters were given more depth. I also liked having more background on Matt who was originally assigned to protect Jenny by Chase. I really enjoyed this novel and look forward to reading more in this series.