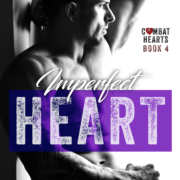 Separating from the Air Force after thirteen years may seem drastic to some, but Zoe Acevedo is finally doing something for herself. Opening an independent bookstore in Haven Springs, North Carolina is a major undertaking, but Zoe has a plan and a list. What she doesn’t have is time for distractions like her interfering family, her cheating ex, or the sexy neighbor who always manages to find her in the most awkward situations.

As a Haven Springs police officer, Tim Larken has dedicated his life to protecting and serving. He learned the hard way that the damsel in distress doesn’t always want to be saved, but somehow he manages to help his curvy new neighbor out of one tight spot after another.

Their attraction is undeniable, but when true disaster strikes will that be enough for two Imperfect Hearts to heal together?

Imperfect Heart is the final book in the Combat Hearts series. It can be read as a stand-alone. Guaranteed HEA and no cliffhangers

Tarina is an award winning author who has spent her entire life in and around the military – first as a dependent and then as an enlisted Air Force member. Her debut novel, Stitched Up Heart, released in September 2016 and hit the number one spot on Amazon’s Top 100 Free Military Romance. She uses her life as inspiration for many of her stories, because truth is stranger (and funnier) than fiction.

Tarina is still active duty and a single mom of six-year-old twins. Her favorite hobby is sleep. She has delusions of retiring from the military and being a stay-at-home mom