Unchained Memory by Donna S. Frelick
My rating: 4 of 5 stars

What a brilliant first read from this author! Unchained Memory is a romantic suspense sci-fi read that totally has you hooked right from the start. This book was captivating, mentally visual and has you completely hooked and on the edge of your seat with the twists and turns along the way. You are never left without adventure and action, and definitely not without the suspense.
I absolutely loved the storyline of this book but also the amazing characters that Donna S. Frelick has created! On top of that, the secondary characters she has created helps progress the main characters’ storylines even more!
I’m so glad I got the chance to read this book, I can’t wait to read more from this author and see what else she creates! I highly recommend this read!

Unchained Memory by Donna S. Frelick
My rating: 5 of 5 stars

Unchained Memory by Donna S. Frelick is the first book in the Interstellar Rescue series. This book is a great mystery that will have you hooked from page on.
This is such a well written book. It is interesting from the word go. You are drawn into the story so easily. The characters are strong and engaging. You want to find out more about them. You want to get to know them that bit more. And the writing is amazing. The authors attention to detail is fantastic. She really knows when to add in the detail and when to withhold it for the development of the story.
Once I had started this story I found that I couldn’t put it down. Thankfully I had the afternoon free to read as I’m not sure what I would have done if I had to walk away for even a short time. The book was well paced and never lost momentum for even a second. You should definitely try to this book, even if sci-fi isn’t usually your thing.

Unchained Memory by Donna S. Frelick
My rating: 4 of 5 stars

I enjoyed this suspense romance story. I enjoyed this author’s creativeness with the plot as well as the characters. They were able to pull me into the story right from the beginning.This is a story about Asia. She has lost three hours of memory along with everything she values in her life. One man risks everything for her, the problem is she isn’t supposed to love him. The twists and turns along with the battle that is raging kept me turning pages until the end. I highly recommend this book.

Unchained Memory by Donna S. Frelick
My rating: 5 of 5 stars

The story Unchained Memory (Interstellar Rescue Series Book 1) by Donna S. Frelick is a science fiction book. It has a way of pulling you in and I found myself not wanting to put it down until I had read the final page. I loved reading about the characters of Asia Burdette and Ethan Roberts. Asia is a woman who is independent, strong, and intelligent. She is also determined to find out what happened to the three hours that she can’t remember. Ethan is a psychiatrist who has compassion for his patients. He is determined to help Asia. What does the future hold for Asia and Ethan? Will they get the answers that they are looking for? Read this book to find out. The story has suspenseful moments when I wondered what was going to happen next. There are also romantic scenes that will make the temperature in the room rise. I grew to care about Ethan and Asia with each chapter that I read. I wanted them to succeed and find happiness. There are other additional characters that are introduced. Many of them are helpful to Ethan and Asia. Then there are those with their own agenda. Don’t miss out on a book that has action and adventure. I highly recommend reading it. 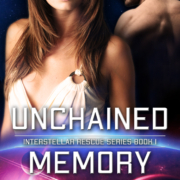 From the night she wakes up in her pickup on the side of the road, three hours gone and everything of value lost to her, Asia Burdette is caught in a clash of invisible forces. She has only one ally in her struggle to understand why–Ethan Roberts, a man she shouldn’t love, a psychiatrist who risks everything to help her.

As a military brat growing up, I was a voracious consumer of science fiction in all forms—in books, in movies and on television. As I grew older I began to recognize that my favorite forms of SF included liberal doses of romance—Classic STAR TREK, the writers of the New Age “humanist” revolution (Zenna Henderson, Ursula K. LeGuin, Theodore Sturgeon among others), and later THE X-FILES and AVATAR. So it was no surprise that when I started writing science fiction, my work would feature a heavy romantic arc, too.

Along my way to a science fiction romance writing career I’ve been married to a great guy since just out of college, been a Peace Corps Volunteer in Africa, raised a family (two girls, three grandkids), tried organic farming, been a community activist, earned black belts in two different styles of martial arts and written four STAR TREK fanfic novellas (and numerous short stories) for “underground” publication. (Ask me sometime about TREK conventions!)

In 2012, my first two SFR novels finaled in the Romance Writers of America® Golden Heart® contest for unpublished manuscripts. Shortly thereafter, I found my first literary home. Unchained Memory was released from INK’d Press in February, 2015. Trouble in Mind followed in February, 2016. The third book in my Interstellar Rescue series, Fools Rush In, debuted in October, 2016 and promptly won a coveted SFR Galaxy Award. You can read the first chapter of Trouble in Mind for free in the popular Portals anthology (Volume One).

The fourth novel in my series, Not Fade Away, launched in 2018 and is also a winner of the SFR Galaxy Award. With the demise of INK’d Press, all my Interstellar Rescue series books are now under my own imprint but can still be found on Amazon.

Currently I live on 43 beautiful mountain acres in Marshall, North Carolina with my husband and four disruptive pets plus the other members of our small intentional community.