This is the first book I have read by this author and I enjoyed being pulled into this intriguing mystery. This book kept me on the edge of my seat, I enjoyed the suspense, danger, humor, and a bit of romance. This story had everything. I was hooked from the beginning and couldn’t put it down unti I found out what happened. I really liked Karina, she’s intelligent and independent, even if she didn’t really understand the danger she was putting herself in. I don’t want to give anything away so you must read this book to find out what happens, I highly recommend this story.

This was a book full of mystery and romance. Should she follow her instincts or leave it be and mind her business? You literally are on the edge of your seat as you read this book. Between all the steamy romance and the great mystery you will find this to be a great page turner. The author has done a great job keeping your drawn in. The author clearly has a great passion for this genre. She has done an amazing job doing something she loves. Make it a great stormy day or cuddled up by the fire kind of read. Enjoy! I can’t wait to read the next one.

Isabella’s Painting is the first book I’ve read by Ellen Butler. This book had all the things I love: mystery, romance, the mob and a strong female. This book had me from the beginning and once I started reading, I really couldn’t stop. Karina is a lawyer/lobbyist in DC. Her boyfriend Patrick comes from a wealthy family. Spending time with his family leads Karina into something that she never saw coming! What can she do? How should she handle it? The way she handles it is brilliant! Such a great book! I cannot wait for the next Karina mystery!

Karina Cardinal is a strong woman who knows what she wants, and what she does not. Trust for her is a must. When she sees something she should not. She steps up and runs right into danger. But does that stop her? Fighting with her mind, boyfriend and his father, things are about to get intense. Remember it’s not over until THE END!

Patrick Dunne is of money. He also has been hurt many times because of it. Hiding his fortune he is out to find his true love. But his trust issues get in the way. He loves Karina, and pushes her too far. Will he keep the girl?

Ellen Butler has done her homework with this story. Not only does she bring a true case into her story. She has history to back up her story. I love this story! She drew me in and suckered punch me half way through the story. Just as I thought I knew what happened, I was wrong. This book is a real page turner. I could not put it down. Job Well Done Ellen Butler!

Review @ Cinful
View all my reviews

Isabella’s Painting is a magnificent mystery/thriller book by Ellen Butler. Butler has done her research when it comes to the underground black market of stolen items. This story gripped me from the very first paragraph until the last word. Butler has twists and turns that made me turn the page quickly and then there were ones that I was hesitant to turn. Butler has fully developed characters that I felt like I could be there in the story with them. This story is about Karina and what she sees and hears by accident. There was a heist of paintings from the Isabella Stewart Gardner Museum. Karina believes she has seen one and overhears about the painting as well. She is not sure who she can trust. Will Karina get help with what she saw or will she turn the other way? Does she understand what she has gotten herself into?

Isabella’s Painting: A Notorious Art Heist Mystery (Karina Cardinal Mystery Book 1) Ellen Butler is a great start to the series. It is a fun read for the most part, I loved the humor, there is mystery abound and lets not forget the little bit of romance thrown in to boot. Throw in the FBI, the Mob, a mysterious painting and some secrets and you have one suspenseful mystery that will keep you engrossed from start to finish. Karina is one sassy and strong, witty and headstrong individual and oh did I mention nosey; woman who has stumbled upon something that change the course of her life. The story was based upon a true story that Ellen shared and based on that she did a great job with writing this story and adding her own spin to things.If you like a good mystery Isabella’s Painting is the one for you.

This is a story of suspense, mystery and some romance. There are even some twists and turns that left me turning pages just to see what was going to happen next. This is a story Karina and how she accidently overhears a conversation that wasn’t meant for her ears. She thinks that she sees the stolen painting that has been missing since 1990. When she is trying to figure out what to do she runs into an old friend. I highly recommend reading this book to find out what happens next.

What a solid story. I loved that it has direct correlation to real life events! I found the plot fascinating and the characters to be well developed. The book kept me guessing every page. I found the author to have a distinct voice that I felt a connection to. Overall, this book was very well written and is one I will recommend to others. 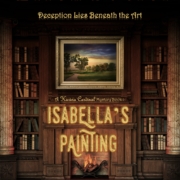 Peeling back layers of lies could save a masterpiece…or reveal a killer.

After a long week lobbying on Capitol Hill, all Karina Cardinal wants to do is chill with Netflix and her boyfriend, Patrick Dunne. Instead, she’s slipping her aching feet into red stilettos for his parents’ annual holiday bash.

When she accidentally interrupts Patrick’s father in his study, her embarrassment is tempered by suspicion that Martin Dunne and his dapper, secretive guest are hiding something. Maybe the painting she barely glimpses right before it disappears behind a secret panel.

An internet search raises her curiosity to full-blown alarm. If she’s right, Martin is in possession of a stolen masterpiece. Infamous because everyone close to it has turned up dead. As in Mafia-style-execution dead.

As she’s chewing over which instinct to follow—back off while she still can, or dig deeper for the truth—she crosses paths with FBI agent Mike Finnegan. An old friend and not-quite flame from her college days. When she looks into his warm, mocha eyes, she’s tempted to tell him everything.

Trouble is, she’s already being watched. And the next move she makes could destroy innocent lives…including her own.

Ellen Butler is a bestselling novelist writing critically acclaimed suspense thrillers, and award-winning romance. Ellen holds a Master’s Degree in Public Administration and Policy, and her history includes a long list of writing for dry, but illuminating, professional newsletters and windy papers on public policy. She is a member of International Thriller Writers, Sisters in Crime and the Office of Strategic Services Society. She lives in the Virginia suburbs of Washington, D.C. with her family.