Flower Shields (A Four Horsemen Novel Book 1) by C.A. King is an excellent fantasy romance novel. Easily worth its 5-stars. Tara and Michael are the main characters. Tara is somehow mixed up in a scenario involving a key. Michael is looking for it as well but to keep it from landing in the hands of demons. Tara is attacked by demons and is whisked away by Michael. That is when things really go crazy.

This story was easy to follow and fun to read. I loved the development and plot twist. The characters were very creative and the backstory was exciting. It was a different fictional beginning for all life. I really enjoyed this novel and hope other readers will too.

Flower Shields by C. A. King is an interesting introduction. Our heroine in this story, Tara, seems destined for anonymity. Such a plain mousey young lady doesn’t seem to make for an interesting tale. But in all good stories there is always more than meets the eye. Someone finds her very interesting. By the time our hero arrives on the scene I was quite caught up in the story. The introduction, Flower Shields, to The Four Horseman novels has been intriguing to say the least. I am certainly on board for the next one.

Flower Shields by C.A King was a fun and great read. I would give this book a five out of five stars. I loved Tara’s character, she is down on her luck and needed something to work out. I really was rooting for her from the first page. I was interested in the back story that was presented, I really liked C.A King’s twist. I enjoy God, Demigod, Angels, and Demons paranormal stories and those characters really came off of the page for this one.

Flower Shields by C.A. King
My rating: 4 of 5 stars

Flower Shields by C.A. King a four-star read that gets a star for each horseman. This is the first story in the Four Horseman series, and I need the rest of the series as I need to know more. I love this author as the stories are super quick to read and always pack a punch, they start on the first page and don’t let up, usually that would mean that you miss character development but it’s not the case with this author. This is definitely a paranormal fantasy read with a little romance on the side, rather than a primary romance. But the story is good, and the writing is great.

This book has it all. Gods, Demons, major conflict, and love. The initial story of the four horsemen, Uri, Gabby, Raphael, and Michael starts out with a bang. This story focused on Michael and Tara and it was good. Watching them fall in love, having to overcome the many problems was a joy, I love happy endings. I look forward to the future novels and each of the other horsemen find their love as well. 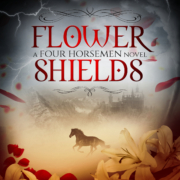 Meet the four horsemen: Michael, Gabrielle, Uriel and Raphael. For centuries their job has been to guard the gates of hell, making sure they never open. Without the keys, there was never any real threat. That’s about to change. There are rumours on the horizon that demon followers unearthed scrolls that explain exactly how to find the lost keys. This new battle is a race to see which side locates them first.

Michael couldn’t care less about the love story behind how and why the world was created. In fact, nothing matters to him other than keeping the gates to hell closed. If one of the lost keys ever fell into the wrong hands, all humanity would be doomed. He’s not going to let that happen – at any cost.

Tara’s life is nothing short of a disaster. She’s managed to flunk out of college with about the same amount of dignity as every relationship she’s been in. The only constant in her life has been her love for flowers. When she’s attacked at work, a stranger comes to her aid. Michael might be good-looking, but he’s also arrogant, bossy and crazy. He’s also her only chance to figure out who attacked her and why. Should she follow her heart and trust him – or listen to her head and run?

Flower Shields by C.A. King
My rating: 4 of 5 stars

Flower Shields is the first book in the Four Horsemen series by C.A King. I have read all of Ms. Kings books now, and this one is among my favourites of hers. I loved the premise of the story and enjoyed reading Ms. King’s take and twist on the four horsemen myth. This is a very creative and individual urban fantasy that has gods, demons, good vs evil, mystery, suspense, action, drama, and supernatural elements.
The characters are superb- fully developed, interesting and likeable- who grew and developed as the story progressed, Tara most of all.
This is a very imaginative, unique and well written story. The author has a very dynamic style, with detailed descriptions and rich, vibrant scene setting. Through her words we are transported into the story and experience it along with the characters. Ms. King has produced an entirely captivating read. I wasn’t sure whether I’d enjoy it as much as some of her other books, but I am happy to say that Ms. King definitely didn’t disappoint, and I loved how she crafted the story and brought all the various elements together, weaving them into a story that held my attention from beginning to end.
I really liked this story am very intrigued by the promise it holds for the rest of the series. I am really looking forward to reading the rest of this series. Bring on Book two!

Flower Shields by C.A. King is the first book in the Four Horsemen series. This story follows Michael and Tara. Michael is one of the guardians of the gates of hell. When Tara is brought into his life everything changes for him. Tara is important to him and his guardianship of the gates and is in extreme danger. The only problem is that Tara does not know about any of this and how she fits into the equation. Michael is great. He is used to being a warrior and only lets the other Horsemen into his life. Tara is a free spirit and is not sure in what her direction to take her life. All she knows is that she loves flowers and being around them.
Tara is lovable and realistic. Many of us do not know what we want to do with our lives and how to fit the things we love into it. She is trusting and a bit naive. This lends itself to the story and her being able to get herself into some trouble but also keep herself protected at times. Michael is a typical warrior. He keeps everything close to himself and has a hard time letting outsiders into his world. On top of this, how is someone like Tara expected to understand him?
This was an enjoyable read and I almost read straight through to the end in one sitting. I enjoyed the story and the characters. The only downside is that the ending was left really open but I know that this is because there is more to come. I look forward to learning more about Gabby, Uriel, and Raphael in the future.