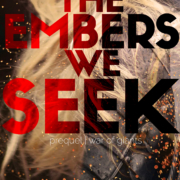 A fairytale retelling in a land of magic and war, see Cinderella like you’ve never seen her before.

As Captain, Wren is sworn to protect the soldiers she leads into battle, which includes preventing a potential massacre in an upcoming campaign that could mean the end of the war in Heros. But defying orders from her Lord could mean a noose around her neck…

If she gets caught, of course.

Accompanied by men and women willing to accept the risk, Wren knows they need a miracle to overpower the sorceress who controls the magical creatures surrounding the city of Eius—one grand enough to win Sortis the victory they’ve been after since the War of Giants began.

There’s always a price to be had where magic is involved, though. A price she doesn’t realize until it’s too late.

The Embers We Seek is a serial series, meaning a new episode of 8-15,000 words will be published in the last full week of every month. Cinderella’s tale will be completed in ten episodes.

Acacia K. Parker has never been the shy one. With her father having served in the Air Force for twenty years, she’s enjoyed homes in many different states, as well as an eight-year stint in Germany (and no, she doesn’t speak German, even though she really wishes she did). The odd encounters with various strangers and places morphed her brain from normal to quite unnatural, and what better way to tame the voices in her head than to become a writer?

Oh, and she’s an artist, too, although getting their faces down on paper only shuts them up for so long (but it certainly helps).

When she isn’t falling prey to the voices, Acacia enjoys jamming out to her favorite Spotify playlists, spending time with her husband, drinking wine, and hanging out with her two writing buddies, Boomer and Sookie (think eighty-pound Golden Retrievers).