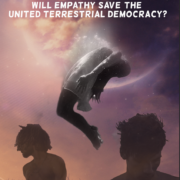 Cursoi are a military order gifted with supernatural skills, devoted to protect the life of the president of the United Terrestrial Democracy. Naira resents them almost as much as she despises newly elected president Crash, an arrogant, hateful bigot. When Naira discovers herself Cursoi, she turns her dismay into a new resolution: infiltrate the Cursoi and undermine the president, but is Crash the real issue?

Things complicate since Naira falls for fellow soldier Drama, whose skill is empathy. Before Drama can uncover Naira’s ploy and deliver her to Lethal, the entitled Cursoi whose skill is crushing people’s organs, the unthinkable happens. Naira and Lethal “link” now sharing each other’s consciousness. Naira’s secrets are uncovered…but so are Lethal’s. The two archenemies will have to find some common ground if they want to save their own lives…and the president’s.

Funny, sexy, and fast-paced, this addictive novel reminds us that we cannot fight anger with anger. It’s time to sit back and take a cathartic trip to the United Terrestrial Democracy

Born and raised in Italy, Gaia B. Amman is the author of Linked, a sizzling sci-fi political thriller about empathy and diversity, and The Italian Saga (volume seven to be released in 2019). She was the 1996 and 1997 winner of a Short Story Award in Arese (MI), Italy.

An avid traveler for work and pleasure, Amman has backpacked across the world. When nobody is watching, she binge-reads novels and manga, watches anime, or rocks it out with her Buffalo-based cover band.

Amman’s novels delve into the depths of human nature, combining the realistic approach of a scientist with the humor and empathy of a survivor.

She is a vegetarian and a fervent supporter of diversity and human rights.

AUTHOR INTERVIEW WITH GAIA B. AMMAN