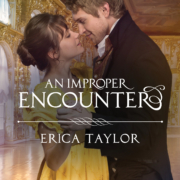 Lady Sarah Hartford is beautiful, wealthy, widowed, and bored. After agreeing to a scandalous dare to seduce a stranger into her bedchamber, she meets the devilishly handsome doctor, William Gordon. Though both keep their true identities hidden, an intense romance blooms between them, and Sarah finally feels like she could be happy again.

Instead, William disappears from her life only to arrive three months later on her doorstep—married, a duke, and with a pregnant duchess in tow. The pair must try to untangle truth from lies while keeping their history a secret from everyone around them.

Erica Taylor is a mother of two and military wife married to her high school sweetheart. Raised in the mountains of Colorado, she holds a BA in History from the University of Colorado. Erica has been writing stories since she can remember, picked up her first romance novel while on a beach vacation as a teenager, and fell in love with falling in love, with sexy heroes and the feisty women who challenge their lives. 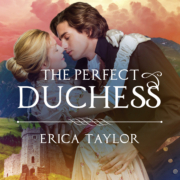 Andrew Macalister, oft regarded as the Stone Duke of Bradstone, hates his annual birthday ball tradition. He dislikes facing those around him who only see him for his title and has given up on a chance to live a normal life. That is, until he spots Lady Clara Masson across the ballroom. Clara’s twin sister is the woman who infamously jilted Andrew at the altar five years ago, but little does Clara know, Andrew had been smitten with her since childhood, and he finds her presence a ray of sunshine in a dreary dukedom.

When Clara’s life is threatened by her evil brother, Johnathan, Andrew must do the only thing he can think of to save her: propose marriage. Between Clara’s trust issues and Andrew’s battle with societal norms, the two find romance under dangerous circumstances.

Erica Taylor is a mother of two and military wife married to her high school sweetheart. Raised in the mountains of Colorado, she holds a BA in History from the University of Colorado. Erica has been writing stories since she can remember, picked up her first romance novel while on a beach vacation as a teenager, and fell in love with falling in love, with sexy heroes and the feisty women who challenge their lives. 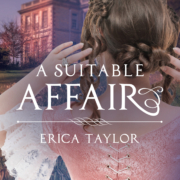 Despite being beautiful and wealthy, Lady Susanna Macalister’s marriage prospects are rather lacking. To avoid a life of spinsterhood, she decides a loveless marriage to the dull and unromantic Lord Riverton is better than none at all. But still, Susanna longs for true, passionate love, the kind she grew up hearing stories about.

Enjoying a quiet walk with her insipid suitor one afternoon, Susanna is nearly trampled by the handsome Earl of Westcott as he rides through Hyde Park. Driven by his own guilt and despair, the earl embraces this chance encounter as an opportunity for vengeance, for Lord Riverton is the very man whom Wescott suspects is responsible for the untimely death of his beloved sister. But is his mission of separating Susanna from Lord Riverton simply a desire to save another unsuspecting lady from his sister’s fate, or something deeper?

As Susanna helps Lord Westcott investigate her future fiance, she realizes she might have found what she was looking for all along. Can the pair keep their budding romance a secret from everyone around them until the investigation is over? Or will the unsuspecting Lord Riverton win Susanna’s hand in marriage before the truth comes out?

Erica Taylor is a mother of two and military wife married to her high school sweetheart. Raised in the mountains of Colorado, she holds a BA in History from the University of Colorado. Erica has been writing stories since she can remember, picked up her first romance novel while on a beach vacation as a teenager, and fell in love with falling in love, with sexy heroes and the feisty women who challenge their lives

A Scottish legacy… A political rebellion… Two hearts destined to meet…
Raised in his father’s image, the Earl of Stanfeld is practical and disciplined. There are no gray lines interrupting the Gideon’s black and white world. Until his mother has a dream and begs to return to her Highland home.

Alisabeth was betrothed from the cradle. At seventeen, she marries her best friend and finds happiness if not passion. In less than a year, a political rebellion makes her a widow. The handsome English earl arrives a month later and rouses her desire and a terrible guilt.

Crossing the border into Scotland, Gideon finds his predictable world turned upside down. Folklore, legend, and political unrest intertwine with an unexpected attraction to a feisty Highland beauty. When the earl learns of an English plot to stir the Scots into rebellion, he must choose his country or save the clan and the woman who stirs his soul.

Bestselling and award-winning author Aubrey Wynne resides in the Midwest with her husband, dogs, horses, mule and barn cats. She is an elementary teacher by trade, champion of children and animals by conscience, and author by night. Obsessions include history, travel, trailriding and all things Christmas.

In addition to her Chicago Christmas novellas, Aubrey will release two more Regency

romances in 2018. The Wicked Earls’ Club will release again in 2019. Wynne’s medieval

fantasy series launched in 2017 with Rolf’s Quest, winner of the NTRWA Great Expectations.