A Deal with Death
By: Carrie Pulkinen
My Rating: 5 of 5 stars

A Deal with Death (Crescent City Wolf Pack #4) by Carrie Pulkinen was an engaging, original read that had me hooked.

I have been waiting for this book, and I’m all in a good feels place cause the wait is over, but I’m sad at the same time cause I want more books from this series like yesterday.

This series has been by far my favourite of the year, and I can’t get enough of this world that Carrie Pulkiene has created. This book opens with a dark bang, and it sets the stage for the crazy good to come. I love how there’s always a mystery, and how the female MC’s are always kickass and brilliant. Sure they have their hot alpha male werewolf, but they’re no push over, and this book is no different with Odette. I loved her, and I think she’s probably my favourite MC so far. Sure sure, James is great too, but Odette, she was just outstanding, and I have a major girl crush.

Overall this book was quite the read, it was as I said, fresh, original and just one of those wow reads that gets your blood flowing. The detail was on point, the plot solid, and the dark themes helped keep your mind engaged. There was enough romance to break it up, and keep it light while not overpowering the characters.

To end, this book this series is a must read, and it gets my super high recommedantion and my golden stamp of approval. 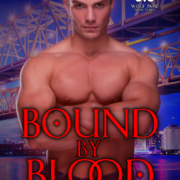 New Orleans homicide detective Bryce Samuels would rather save lives than investigate deaths. He earns a promotion allowing him to do just that, but he never thinks the people he’ll be tasked to save will be the ones closest to him. When the woman of his dreams shows up on his doorstep, beaten and bruised, the mysteries surrounding her “accident” will leave him fighting not just for her life, but for his own.

A rogue can’t be expected to settle down, especially with a human cop, who doesn’t know werewolves exist. But that’s exactly what Alexis Gentry’s wolf nags her to do from the moment she meets Bryce. When a run-in with her sadistic ex turns deadly, she seeks shelter with the sexy detective to avoid starting a war between the packs.

Alexis guards her heart as heavily as her secrets, but as the walls come down, she can’t help but fall for Bryce. Letting him into her supernatural world will endanger his life, but she soon discovers what he doesn’t know can hurt him.

Carrie Pulkinen is a paranormal romance author who has always been fascinated with things that go bump in the night. Of course, when you grow up next door to a cemetery, the dead (and the undead) are hard to ignore. Pair that with her passion for writing and her love of a good happily-ever-after, and becoming a paranormal romance author seems like the only logical career choice.

Before she decided to turn her love of the written word into a career, Carrie spent the first part of her professional life as a high school journalism and yearbook teacher. She loves good chocolate and bad puns, and in her free time, she likes to read, drink wine, and travel with her family.

Beneath a Blue Moon by Carrie Pulkinen
My rating: 5 of 5 stars

Beneath a Blue Moon (Crescent City Wolf Pack Book 2) by Carrie Pulkinen
This is book two in the series and it follows Chase second in command to Luke the alpha. Chase is wary of witches and avoids anything to do with them at all costs due to an event from his past. When he meets Rain a cursed witch he tries his best to avoid her even though the Alpha has put him on cake duty which deals with her directly. He is fine with just being civil until he realizes she is his fate bound. When an energy vampire begins targeting witches his protective instincts arise. Can he protect her while also keeping his family safe from her curse. Will he be forced to pick between his mate and the pack?

I loved this novel and both the main characters Rain and Chase. Rain had a spunky personality, strong will, and was full of compassion. She looks for ways to end her curse and hates that it causes others with witch blood harm for their kindness. Chase is a great guy. He is dedicated to the pack and to his family. He also sounds mouthwatering from the description in the book. I loved following the romance between the two and the storyline was easy to follow. I could not put this novel down. That’s why I rate it 5 stars.

Detectives Shaw and Shade are more than your average crime solvers; they are Spirit Walkers.

When they catch a gruesome murder, they’re able to discern the killer has been active since the end of WW2 and the number of killings seem to be increasing in frequency.

They have one lead – Feather Woods – who appears to have known each of the victims. Is she being stalked or is she the culprit?

The detectives race to find out before Shade becomes the next victim.