Running from Demons by M.K. Theodoratus
My rating: 3 of 5 stars

Interesting novel. The most impressive part of the book is Pillar and the challenges she faces in her life, in the way her coming-of-age story explores identity. Pillar is a girl who is trying to find her place in a world surrounded by people with power. Everyone around her has power, but to be mundane, to be a null, especially with a mother who wasn’t, it complicates her life and, in ways, makes her an outcast. Which is unfortunate. But that’s also what makes Pillar strong. Pillar faces adversity from all around her, along with demons. Pillar is a great voice for a generation that often feels ignored. She has spent her whole life being put down only to rise in the face of adversity and challenge it, and that’s what makes her great, that challenge, that’s what makes her shine in the novel.

The added element of this hidden power she has within her, it also makes her compelling because it’s not a power she needs to define her, it’s just power she happens to have, the power that was hidden from everyone around her. And that’s great because it adds history to the novel, it adds context to the universe this story is being told in.

Now, the other characters in the novel, well the fact is that there are just too many. Some of them are great, but some of the dynamics between the characters, they don’t get to flourish as they should have. There’s just so much story crammed into this one novel that it almost feels like two novels are trying to coexist and squeeze together. Now, that’s only due to the pace of the book and the scene dynamics. There’s just so much richness in the scenes and story that once the door opens for exploration, its shut and the reader is shoved down a hall towards another door. That’s the biggest fault of the novel, this idea that so much had to be crammed into it for M.K. Theodoratus to tell this story and adventure of Pillar.

Despite that, however, the story is inventive and does provide readers a unique urban fantasy. It has a context to it and many great characters that make it a fun story. The story could have easily been 200 pages longer max, and it wouldn’t have dragged out the story. There’s just so much happening, and the level of detail makes the readers eager for something that doesn’t fully get explored. Pillar’s continuously moving in the novel and so it the reader. Roots are not forming here, but that might be intentional since Pillar is searching for roots of her own, a history of her own. So on that level, the reader can truly connect to the main character in a powerful way which is what makes the story, in the end, compelling. 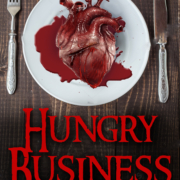 Love the Way You Dance by Allison M. Boot – Review by Sara Oxton

Baba Ali and the Clockwork Djinn: A Steampunk Faerie Tale by Danielle Ackley-McPhail and Day Al-Mohamed – Review by Jennifer Gordon

Follow Us!
Alterations Trilogy (Alterations, Game Changer, Primal Will) by Jane Suen –... The Only One (The Brothers of Camelot Book 1) by Necie Navone – Review...
Scroll to top