Resisting the Rancher is the second book in the Hills of Texas Series by Kadie Scott. Ms. Scott is a new-to-me author and I am really happy that I stumbled on her book, because I really enjoyed it and I will definitely be reading more of her work in the future. This is the second book in the series, but it can be read as a standalone, which is what I did. There are characters in this book who had their own story, in book #1- and they have intrigued me enough to want to go back and read their story as well.

This book is a great contemporary/western/cowboy romance. There was drama, chemistry, some emotion, passion, and wonderful characters.

Rusty Walker is quite an accomplished young woman- she is top level barrel racer, a brilliant horse trainer, a masterful rider, and can run a ranch with her eyes closed. But, even as talented as she is- she can’t seem to put a foot right when it comes to her controlling, hard-hearted father. She constantly feels the need to prove herself to him, but he never acknowledges her skills, let alone show her any affection. Rusty wants to take over the family ranch when her father retires, which she hopes will be soon. But instead, he announces that she won’t have anything to do with the ranch unless she marries within the next year. Rusty is shocked- she doesn’t even have a boyfriend, let alone a potential husband on hand. She really wants to be able to put her mark on the family ranch, but she has to face the fact that her dreams may be going up in smoke. What can she do? Because things don’t look good for her, and she may be left with no choice but to leave the only home she’s ever known.

Williams Hill is a cowboy rancher, who is building a business providing stock to the rodeo circuit. He is a gifted horse trainer, and a savvy businessman. While at the latest rodeo, he notices a sexy redhead singing her heart out in the car stopped next to his at the lights. There is a spark of awareness between them, before she takes off when the lights change. Will can’t stop thinking about her but thinks he probably will never see her again. So, imagine his surprise when he sees her at the rodeo- but whenever he tries talking to her, she shuts him down. But as the days pass and they keep bumping into each other, she slowly begins to thaw.

But she won’t allow herself to trust him completely, because she’s been burnt in the past- not to mention having a father like hers has given Rusty quite a lot of issues. When Will discovers who she is and what her father had demanded of her, he makes her a deal she can’t refuse. What is the deal you ask? And does Rusty’s suspicious nature get the better of her and end up derailing their blossoming romance? And will she finally win her father’s respect? All this and more can be discovered between the cover of this great book. You really should uncover all the answers for yourself. It really is worth the read!

Now I am looking forward to reading the rest of this series, if this book is any indication, they are set to be awesome! 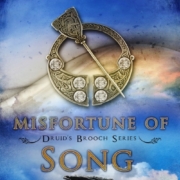 Follow Us!
Luke (The McKades of Texas, #3) by Kimberly Lewis – Review by Heather... Resisting the Rancher (Hills of Texas, #2) by Kadie Scott – Review by...
Scroll to top