Stepping It Up is the second book in the Liberty Lawrence series by Bea Stevens. This is a charming, light-hearted and fun read that is entirely entertaining. This is the second book in the series, but you could read it as a standalone. But, having said that, I really recommend reading the first book before embarking on this read- because the first book introduces you to recurring characters, and lays out a foundation that the series will be built on. Plus, it’s a great read as well!

I loved Liberty, she loves fashion…. And shoe!! She’s also somewhat clumsy, fun, and a little off-beat….. making her very likeable and entirely relatable. This series follows her escapades, with some interesting and very entertaining results.

In this book, Libby has a new job as a reporter, which she had hoped would be the beginning of great things for her. But, things ae not playing out the way she had hoped. For a start, she is teamed up with Dave Chandler and is supposed to be shadowing him. But, Dave proves to be challenging on several levels- as he loves to run everywhere he goes; and then to top it off, he sneaks off without her. Plus, she isn’t ‘fitting in’ at the office either, as the other women seem to dislike her. Also, her best friend Cassie seems to have her life on track and is doing quite well- making Libby feel even more off-keel. But, the most troubling thing for Libby is how much she likes James Harper, who we met in the previous book- but he’s just too side-tracked to notice, or care. Not one to give up so easily, Libby decides that it’s time she does something about her situation- it’s time she started Stepping it Up! And what transpires made for some really great reading. I would happily recommend this book/series to anyone looking for a great Chick Lit story, that is light on the drama, but not lacking in enjoyment! 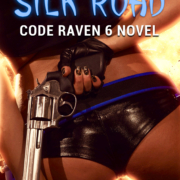 Linda Gets Her Groove Thing: A Spicy Romantic Comedy About the Afterlife (The Green Room Chronicles Book 2) – Review by Karyn Taylor

Blessed: The Academy of Seraph by Brandi Elledge – Review by Chantelle Smith

Follow Us!
Casstiel: Born of Lightning by Sheri-Lynn Marean

Stepping It Up (The Liberty Lawrence Series Book 2) by Bea Stevens – Review...
Scroll to top