In the dark where monsters live, a dark story flourishes to life, born of wicked intent and evil power.

A warning of sorts, sinister actions threaten the innocent and rob them of their virtue.

Steel Archer, with his commanding charisma and keen focus captivated his platoon. He had been to battle and tasted the sand of the desert war. No one understood, how could they? The adrenaline buzz, the anticipation, the planning and preparation that came with each mission fed his mind, body, and soul. It was addicting until it all went wrong, men died.
His men.

But now that was all behind him. PI- Securities firm was where he landed and his reputation for questionable methods of persuasion, worked to his advantage.

“I’d been told I had a calm about me. But don’t be fooled, undermining my power would be foolish. I saw myself as a wild predator who lived life on the razors edge.”

His good looks and intensity rolling off in waves. Years of training banishing any trace of emotion. Every muscle in his body instinctively warning him, like a sixth sense of what’s to come. Foreseeing the enemy’s next move is far more primal, instinctive, and raw than most believe.

“There’s never been room for a life outside my profession. Certainly not a woman, that’s a liability I can’t afford to indulge in. “

Until he met his match.

Virginia Wine’s love for books all began as a book-blogger, dedicating her time and passion to talented authors, assisting and reviewing the world’s top writers.

A voracious reader herself, and insatiable appreciation for the book world. She soon discovered her own passion for writing, and knack for storytelling. Writing what she loves to read, the romantic suspense genre was a perfect fit. Dreaming of new ways to tug her readers heart strings, and creating scorching hot love scenes fed the thrill for inventing new stories. Only just begun, she came out of the gate with a blast, delivering the Amazon best-selling Author with her first book, then again with her second series. Midwestern born Virginia Wine can be found living in paradise, on a beautiful lake where she and her family enjoy the water, and peace living amongst a small-town feel. 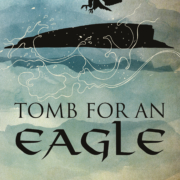 Monty and the Monster by Rhonda Smiley – Review by Lisa Helmick

Tomb For an Eagle by Lexie Conyngham

Follow Us!
Caught in the Spin by Sharleen Scott – Review by Moriah Venable

Deepest Midnight: Book One of the Immortal Kindred Series by Clara Winter
Scroll to top