Undercover by Via Mari
My rating: 4 of 5 stars

Book 2 is just as good as book one. The action, the hotness, even the secrets being kept. It seemed that everyone was undercover for one reason or another! I kept trying to guess who the good guys were and who the bad guys were.

Matt is a body guard. He is also working undercover trying to uncover some mafia secrets and save innocent people. He is good at what he does. It doesn’t hurt that he is delicious to look at.

Marenah is the twin sister of Sasha from book one, Wayward. (You really don’t have to read book one to read Undercover but it sure doesn’t hurt.) Marenah’s family has many ties to the mafia, which includes secrets of their own. We know that her loyalty lies with her sister. We also know that Marenah is undercover, but who is she trying to help?! So many secrets!

Reading books by Mari makes good sense. These books are easy to read, adventurous, steamy and an easy way to escape reality. 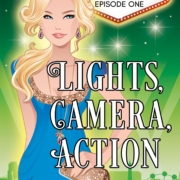