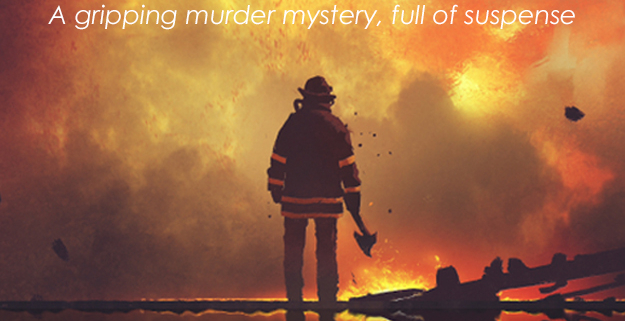 The investigation into a warehouse fire turns into a murder inquiry when a woman’s body is found in the debris.

DI Tanya Miller investigates, but her efforts are thwarted by a family problem that demands immediate attention. Her niece has gone missing, and her distraught sister is adamant Tanya help find her.

Juggling the two is difficult. Left to their own devices, her team are making little progress understanding the cause of the warehouse fire.

Whilst her team tries to discover what happened to the dead woman, who it turns out worked on the streets and was involved in drugs, Tanya is trying to understand what has happened to her niece – hopefully still alive. The contrast in their backgrounds could not be starker, but is her sister’s daughter the angel that her parents believe her to be?

One thing is certain, Tanya is under pressure to get results, and it will take all of her wits to come out on top.

BURNING GREED is the second murder mystery to feature DI Tanya Miller. It can be enjoyed entirely on its own as a standalone, but readers will also enjoy the first book, BROKEN ANGEL and the third, BRUTAL PURSUIT.

Diane M Dickson was born in Yorkshire but grew up mostly in the Liverpool of the Beatles and Ferries Across the Mersey.

She is married with two children – one of each brand and two grandsons.

After almost twenty years living and working in the Middle East – most of which was wonderfu! – Diane moved back to live part of the year in the middle of a forest in South West France and the rest of it in the Midlands of the UK watching Ducks on the canal outside her window

Diane has loved reading and writing for as long as she can remember and embraced computers when she discovered that it enabled her to draw straight lines.

She is published by The Book Folks and considers herself very fortunate indeed to be able to say that she is a published author.

Diane is a member of The Crime Writers Association.