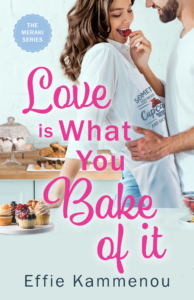 The only love Kally Andarakis is baking is in the form of the sweet treats she whips up in her café, The Coffee Klatch.

Kally never believed herself to be a person worthy of love, but when an intoxicating man she considered out of her league pursues her, she risks everything to be with him. Later, when tragedy strikes, truths are revealed that leave Kally brokenhearted and untrusting.

Eight years later, Kally is a successful pastry chef running the café she’d always dreamed of owning. With a home of her own, a profession she’s passionate about, and the support and love of friends and family, Kally is content with the life she has carved out for herself.

Until the day Max Vardaxis walks into her café…

With arguing parents, meddling relatives, an overly energetic grandmother, a man-crazy best friend, and the long ago, mysterious disappearance of a grandfather, this new man in town is just one more complication in Kally’s life, if not the main one.

Kally must now decide whether to keep her heart safe or to once again take a ‘whisk on love.’ 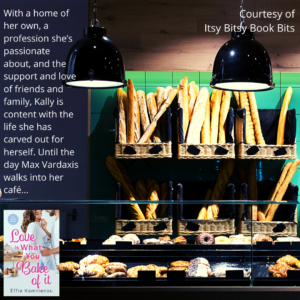 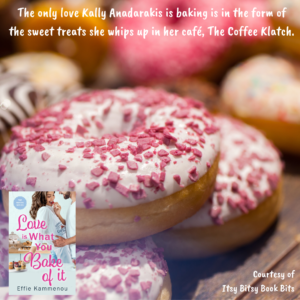 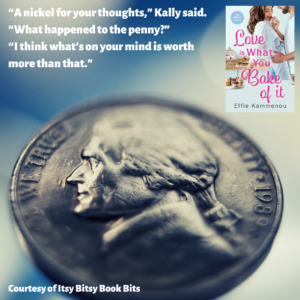 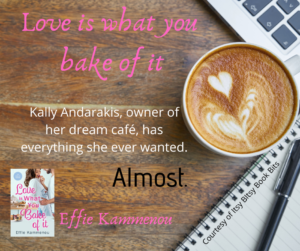 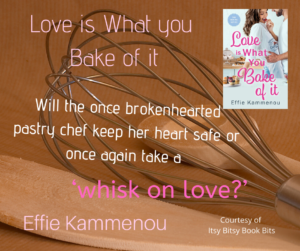 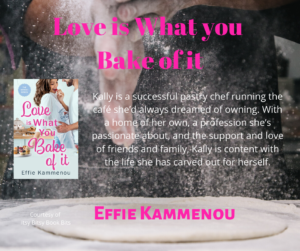 Effie Kammenou is a believer that it is never too late to chase your dreams, follow your heart, or change your career. She is proof of that. At one time, long ago, she’d hoped that by her age, she would have had an Oscar in her hand after a successful career as an actor. Instead, she worked in the optical field for 40 years while raising her two daughters.

In 2015, three years after the death of her mother from pancreatic cancer, she published her debut novel, Evanthia’s Gift, book one in a women’s fiction, multigenerational love story and family saga, inspired by her mother and her Greek heritage. Kammenou continues to pick her father’s brain for stories of his family’s life in Lesvos, Greece, and their journey to America. Her interview with him was published in the nationally circulated magazine Reminisce.

Her latest novel, the first book in a new contemporary romance series, is now complete. Love is What You Bake of It, follows Kally’s path to independence despite her sometimes stifling family and her tumultuous road to finding love. But it wouldn’t be a Kammenou novel without a delve into the past, or the references to mouth-watering foods.

Effie Kammenou is a first-generation Greek-American who lives on Long Island with her husband and two daughters. When she’s not writing or posting recipes on her food blog, aptly named cheffieskitchen, you can find her entertaining family and friends or traveling for ‘research.’

As an avid cook and baker, a skill she learned from watching her Athenian mother, she incorporated traditional Greek family recipes throughout the books for a little extra ‘flavor.’

She holds a Bachelor’s Degree in Theater Arts from Hofstra University.

Follow Us!
Anne by Zarina Macha – Review by Erica Fish Love is What You Bake of it (The Meraki Series Book 1) by Effie Kammenou –...
Scroll to top