Seducing Fortune by Brinda Berry
My rating: 4 of 5 stars

Seducing Fortune is the third book in the Serendipity Series by the talented Brinda Berry. Dylan Mercado, has taken over his father’s car business after his father was forced to retire because of health issues. He has always been a playboy, taking home one woman after the next, never committing to anyone. Emerson, is a former stripper turned housekeeper for Dylan and his roommates, Jordy and Collin. They have always been friendly with each other but after a brief dancing encounter one night they both secretly have feelings for the other. Unfortunately, neither one of them is willing to let down the walls they have built up from their tumultuous past.

Emerson is living life, raising her sister Gabby, working hard and trying to forget about the fact that her father is in prison. She still can’t believe that she was once a stripper but also doesn’t want that to define her. She has spent so long, not letting anyone into her life that she is stunned when Dylan takes her off guard. “I’m normally a good liar. Someone asks how I’m doing and I pull on my hunky-dory mask. Another mentions my dad in the federal penitentiary and I act as though it doesn’t bother me. My real feelings are buried deep, a grave of emotions. No visitors allowed.”

Dylan, has a good reason for not letting anyone in and it’s one no one would ever know. He was left devastated one time in his past, and has found it’s not always better to have loved and lost, than to never have loved at all. He also comes from a family where money seems to be the only important thing, instead of relationships.

Each of them have their own impressions of the other, but soon discover that they don’t really know anything each other. They discover that their version of the truth may not be the truth at all. “The enormity of my prejudices slams me. It’s not like I expected a silver pole in the middle of the room. But I don’t expect ex-strippers to be ex-homecoming queens.”

While Emerson is working out her feelings for Dylan from afar, she meets Toby a nice guy who wants to date her and just happened to be there when she needed help. He continues to reach out to her, help her in her times of distress, and be compassionate. Her father’s past and misdealing’s soon come back to haunt her and she is left having to fight to survive while trying to protect the ones she loves. She is forced to keep secrets from those around her, but doesn’t realize that the people around her have been keeping secrets a very long time. Not everything is as it seems and things may have been put in motion long before she even realized. The twists and turns this story takes will keep you guessing and maybe rooting for the people you shouldn’t be.

Will Emerson and Toby end up happy? Will she break his heart and take the less safe road to Dylan? Can Dylan, let go of his past hurt and truly be committed to one woman and no matter what they decide will any of them survive?

I loved Brinda Berry’s writing style, which kept the story flowing non-stop. It is refreshing to read a book that has romance, love, pain, sorrow, and so much more without only focusing on the sexual aspects. She writes a classy novel that will be appealing to women everywhere and does a great job of bringing the reader into the characters’ lives. 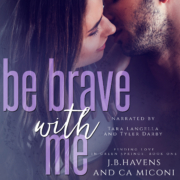