Snatching Dianna by Seelie Kay
My rating: 4 of 5 stars

Snatching Dianna is the first book in the Feisty Lawyers Series by Seelie Kay. This is a short story, which makes it a very quick and easy read. There is intrigue, suspense, humour, action, adventure, danger, drama, some romance, and a bit of spice.
Dianna Murphy is a beautiful, smart and savvy college student, who’s studying law. When she goes missing, her roommate is frantic and approaches law professor Janet MacLachlan for help in tracking her down. Janet is an ex-secret agent, and she in turn enlists the help of her husband Cade Matthews (who is a covert operative) and the local police chief, David Manders. Realizing they have a lot of ground to cover and need more man-power, they also recruit David’s wife, as well as several law students- and the ‘team’ gets to work to try and figure out what happened- before Dianna disappears forever. And so starts a chain of events that takes the investigators (and us) on quite the adventure. Across continents, from the United States to Morocco, this story is quite a gripping tale. An intense investigation leads to an international human trafficking ring… and now it’s not just Dianna’s safety on the line!
I really enjoyed this clever little suspense. I love the characters, having met Janet MacLachlan, Cade Matthews and Anders Mark in “Hanging From a Ledge”- which was one of the short stories in the “Kinky Briefs Cinque” collection. I loved them then, and now after this story, I love them even more. I enjoyed their chemistry, funny banter, quips and antics. It made them quite realistic and very endearing.
I think Janet and Cade’s adventures would make a great Television series.
I can’t wait to see what new adventures and investigations await in the future instalments of this new series! 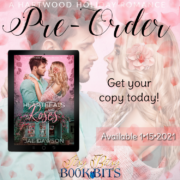 Love the Way You Dance by Allison M. Boot – Review by Heather Lovelace