TWO HEARTS UNDER FIRE by Tamara Ferguson
My rating: 5 of 5 stars

Two Hearts Under Fire is the eighth book in the Two Hearts Wounded Warrior Romance Series by Tamara Ferguson. This story is a wonderful military/wounded warrior romance, with danger, emotion, mystery, suspense, action, adventure, love, a little drama, and hope. As always, Ms. Ferguson drew me in from the very beginning of the story and held my attention the whole way through. I have read most of her books now, and have loved every single one. I especially love how her stories all help to build a much bigger picture- with many interconnected details, characters, or situations- as each one adds another layer, or unravels a little bit more of the much bigger picture that’s being woven in the background. The stories are always intriguing, and each book only reinforces the fact that Ms. Ferguson is a consummate storyteller- and one I won’t tire of any time soon….A.K.A ever!
Ms. Ferguson crafts wonderful characters- giving them strengths, but also not shying away from giving them some vulnerability too. Claire and Russ’ are great characters who have a very interesting story to tell- and this is where I confess that I really wasn’t sure what to think of Russ after meeting him back in Book #6. I worried that I wouldn’t connect with him when I realised that this was ‘his’ book. But I needn’t have worried because he won me over and I became completely invested in the story.
This story is intriguing, well written, realistic, believable, emotive and entirely engaging. I am looking forward to seeing what she has in store for us next! 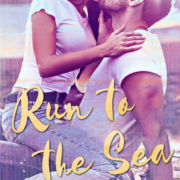 Run to the Sea (Reigning Hearts Book 1) by KG Fletcher