My Life Series: Box Set: Prequel to Brothers of Camelot by Necie Navone
My rating: 5 of 5 stars

My Life Series: Box Set contains the three book prequel to the Brothers of Camelot series. It can be read as a standalone, but once you read it you will want more. Be prepared for a Necie Navone addiction!!!
I love this series so much! It has everything you could want in a captivating read. There’s action, friendship, grief, loss, camaraderie, longing, suspense, emotion, playful teasing, funny banter, and lots of riveting of drama- in this bloody and somewhat violent, coming of age story- with a twist. It really reminds me of “La Femme Nikita” in a lot of ways- which I also love about it. I think this series would make a brilliant movie, television series, or telemovie!!

Alessandra Canzano was born into an Italian crime family, the only child of the powerful and ruthless Capo (boss). She is their Princess, treated as royalty and living a fairytale life- until her sixth birthday when danger makes itself known, changing her life forever.
Her father had big plans for her right from the moment she was born, but after the events at her sixth birthday, he becomes even more controlling and obsessive. Alessandra’s beloved Uncle was tasked with training her, as he would one of the men. From the age of six she learnt hand to hand combat, then at eight she began weapons training as well. She was to tell no one of her training, or the reasons behind it. She was to keep that part of her life hidden from her mother, grandmother, family and friends.
Aless soon became one of the best fighters in ‘the family’, easily able to out shoot and defeat any of the men in hand to hand combat. But she was also learning a lot more about her family, their business, and the role in it all. She feels the heavy burden of responsibility and expectation, wishing she could just live a normal life. She has one brief encounter with a boy that stays with her long after he’s gone. Holding that moment in her heart and dreaming of a life with someone who loves her passionately.
Although she may be the family Princess, she feels more like a prisoner. The more she learns, the more she questions whether she can be a part of that world anymore. She starts to wonder if she would be better off running away and leaving it all behind. With danger an ever-present part of her life, Aless will have to remain vigilant. She is determined to find a way to avoid what her father has planned. But what can she do? Will she have no choice but to buckle under the pressure to preform to his expectations? What exactly does her father have planned for her? What does she uncover along the way? Where does Greyson fit into all of this? Does she end up staying because she’s afraid of losing everyone she loves? Or will she finally escape her gilded prison? What does her future hold? Shocks, twists, tragedy, lessons and more await Aless.
Ms. Navone is a wonderful storyteller, weaving a superb story that plucked at my heart strings, had me on the edge of my seat most of the time- whilst also creating characters who came to life, pulling me into their world and holding my attention right through till the end. The story is told from several POV’s which gave the story an extra element of interest. There was a lot going on in this book, lots of action, suspense, some violence, emotion, drama, and just a drop of romance.
Highly recommended reading!!
Brilliant! 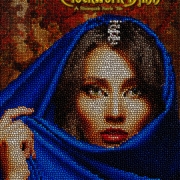 Baba Ali and the Clockwork Djinn: A Steampunk Faerie Tale by Danielle Ackley-McPhail and Day Al-Mohamed

Say Something by Jennifer L. Allen – Review by Kaitlynn Taylor

Vermilion Lies (The Order of the Senary Book 3) by L.D. Rose – Review by Krystal Gregory
0 replies