The only thing more dangerous than using your magic to help a cybernetic spy find a missing criminal, is being the criminal he’s looking for…

When Rune Leveau is approached by a charmingly dangerous, cybernetically-altered, corporate spy, St. Benedict, his request seemed simple: use her magical Talent to help him find an elusive criminal named Anna Masterson. But Rune has a dangerous secret: She IS Anna Masterson.

Over the past six years, St. Benedict has searched for the Masterson Files, a computer program rumored to do the impossible—cast magic spells. The technology could reshape the world. His last hope is this Finder of the Lucky Devil, but the Finder is proving difficult… and St. Benedict isn’t going to take no for an answer.

Set in an alternate Chicago, where technology and magic are in competition with each other, this fast paced Cat-and-Mouse chase makes The Finder of the Lucky Devil a welcome addition to your urban fantasy/cyberpunk library.

Megan Mackie is a writer, actor, and playwright. She started her writing career as an indie author and had such smashing success in her first year with her inaugural book The Finder of the Lucky Devil, that she made the transition to traditional publishing. She has become a personality at many cons, recognizable by her iconic leather hat and engaging smile. She has recently joined Bard’s Tower, a mobile con bookstore, and has sold her books next to great authors such as Peter David, Melinda Snodgrass, Dan Wells, Claudia Gray, John Jackson Miller, and Jim Butcher, to name a few.

She has published four novels including: The Finder of the Lucky Devil, The Saint of Liars, Death and the Crone, and Saint Code: Lost through eSpec Books. She is also a contributing writer in the role-playing game Legendlore soon to be published by Onyx Path Publishing.

Outside of writing she likes to play games: board games, RPGs, and video games. She has a regular Pathfinder group who is working their way through Rapanthuk. She lives in Chicago with her husband and children, dog, three cats, and her mother in the apartment upstairs. 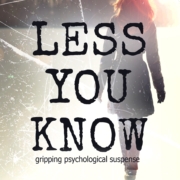 Less You Know (Ashes to Ashes Book 2) by Rowena Holloway

My Life Series: Prequel to The Brothers of Camelot by Necie Navone – Review by Katie Matthews