“Hardy har har,” Wynn retorted. “How did it happen?”

“How did what happen?”

The growl in his voice probably cowed a great many folks. She didn’t happen to be one of them. Even if he was big and intense and talked about delivering death like it was the mail. “Your leg.”

He didn’t respond. Instead, he stood at the sink and stared out into the storm.

“Is it a state secret?” she wanted to know. “A matter of national security? An injury suffered while on a clandestine mission that you can’t talk about under penalty of death? Did they make you swear on a Bible?”

His gaze fell to her mouth, and awareness speared through her, a hot, electric slide that made her cheeks burn.

When a local bank robbery brings newly elected Sheriff Beau Greystone to Wynn Owens’ front door, she has only two things to give him: the endless bounty of her caustic wit and a one-finger salute. Wynn has history with the law, none of it good. And the notion that one of her elderly tenants might have something to do with the robbery is just plain crazy.

A former DEA agent, Beau owes his newly minted badge solely to his meddling aunt and his own foolish indifference. Recovering from the murder of his wife—and the debilitating injury caused by the explosion that killed her—Beau has been happily checked out for some time. But the people of Blossom Hills are counting on him to do his job, and bringing a bank robber to justice is a fine place to start…until the killer that’s haunted the town for the last decade abruptly returns.

Wynn has a tenant to exonerate; Beau, a killer to catch. Neither is prepared for the compelling but unwelcome current between them, or the unexpected circumstances that will force them to reassess the rules by which they live. But the clock is ticking,and they must decide: adapt and evolve, or surrender to the past and the dark malevolence that has risen within it….

Hope Anika is an indie author who lives in the Greater Yellowstone area. Her books have been finalists in the Daphne du Maurier Award for Excellence in Mystery and Suspense and The Fool for Love Contest sponsored by Virginia Romance Writers, Chapter 19 of Romance Writers of America. She can be reached at hope@hopeanika.com. 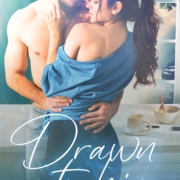 Is This Me? (Being Me Book 1) by Tricia Copeland – Review by Rosanna Ingram

Our Unexpected Hope by Michelle Sullivan – Review by Kerry Baker

Drawn to Him by Tammy Mannersly

CLAIMED (The Torzial Affair) By Via Mari – Review by Laura Furuta

HIT AND RUN by Diane Hester – Review by Joanne Ellis

Follow Us!
A Study in Spirits (College Fae book #2) by Byrd Nash

The Finder of the lucky Devil (The Lucky Devil series Book 1) by Megan Mack...
Scroll to top