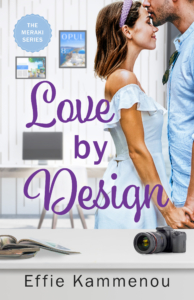 Mia Andarakis just landed her dream job at a luxury magazine. And even better, her boss is the handsome and enigmatic Nicholas Aristedis, a man she has crushed on from afar. But Nicholas isn’t who she imagined. Irascible and mercurial, his instant dislike for Mia makes it almost impossible for her to work with him.
Nicholas has faced many losses and heartaches in his thirty-two years. Determined to avoid heartbreak, he has closed his heart to love. But Mia awakens feelings in him he had long since denied. And soon he discovers their connection is deeper than he realized.
Mia and Nicholas embark on an adventure across picturesque locations as they launch a new publication and uncover the mystery behind her grandfather’s disappearance. But perhaps the greatest challenge is in learning to set aside their insecurities and fears. Can the two forget the traumas of their past? And will they ever learn to trust in the possibility of love? Find out in the second novel of The Meraki Series. 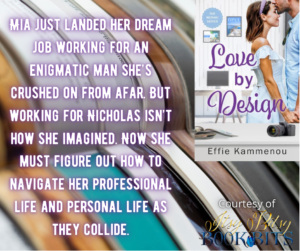 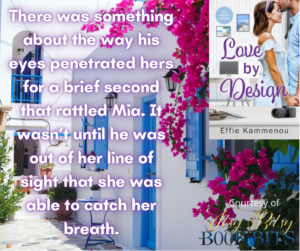 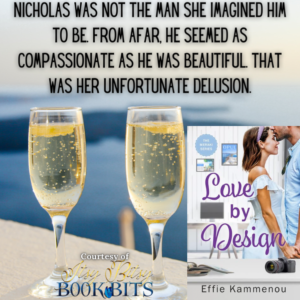 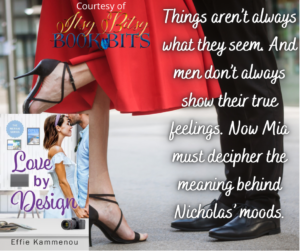 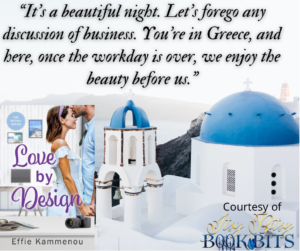 Effie Kammenou is a believer that it is never too late to chase your dreams, follow your heart, or change your career. She is proof of that. At one time, long ago, she’d hoped that by her age, she would have had an Oscar in her hand after a successful career as an actor. Instead, she worked in the optical field for 40 years while raising her two daughters.

In 2015, three years after the death of her mother from pancreatic cancer, she published her debut novel, Evanthia’s Gift, book one in a women’s fiction, multigenerational love story and family saga, inspired by her mother and her Greek heritage. Kammenou continues to pick her father’s brain for stories of his family’s life in Lesvos, Greece, and their journey to America. Her interview with him was published in the nationally circulated magazine Reminisce.

The second book in her latest series, The Meraki Series, has recently been released. Both Love is What You Bake of it and Love by Design are contemporary romances following a pair of sisters and their quest for love and professional success despite their sometimes stifling and meddling family. But it wouldn’t be a Kammenou novel without a delve into the past, or the references to mouth-watering foods.

Effie Kammenou is a first-generation Greek-American who lives on Long Island with her husband and daughters. When she’s not writing or posting recipes on her food blog, aptly named Cheffie’s Kitchen, you can find her entertaining family and friends or traveling for ‘research.’

As an avid cook and baker, a skill she learned from watching her Athenian mother, she incorporated traditional Greek family recipes throughout the books for a little extra ‘flavor.’

She holds a Bachelor’s Degree in Theater Arts from Hofstra University.