Beneath a Blue Moon by Carrie Pulkinen
My rating: 5 of 5 stars

“He’s a smokin’ hot werewolf whose kisses make me feel like a fireworks display with a very short fuse.”

Beneath A Blue Moon is the spellbinding second instalment in the Crescent City Wolf Pack series by Carrie Pulkinen. It could be read as a standalone, but seriously, do yourself a real favour and read book one! You really won’t regret it!
I am so in LOVE with this series- I adore everything about it- the brilliant writing, the wonderfully captivating storylines, and the fantastic characters (yes, even the ‘badies’- because the story wouldn’t be the same without them). I didn’t expect going into the first book that I would love it as much as I did, so going into this one I did have pretty high expectations and I was somewhat sceptical as to whether Ms. Pulkinen could deliver another book that would enthrall me as much as the first- but what I found between the covers of Beneath A Blue Moon is so much better than anything I could have imagined. I truly love both books so much, but I have to say that this one has etched itself into my heart just a little deeper than the first!
It is a great paranormal romance- with shifters/werewolves, witches, the supernatural, mystery, suspense, danger, action, murder, drama, secrets, shocking discoveries, and emotion. As with the first book, the story unfolds against the vibrant and mystical backdrop of New Orleans.
Rain Connelly is fairly new to town, opening a bakery called Spellbound Sweets. She’s a witch who had her powers bound and has spent the past seven years looking for a way to get them back. Owning a bakery has always been one of her dreams and she hopes that she can make it a successful venture. But things aren’t going as well as she hoped, having invested all her funds into getting the bakery up and running, she really needs it to start bringing in customers and making money- or she will be forced to close the doors on her dream. When the Alpha werewolf and his fiancée are looking for a bakery to make their wedding cake, Rain wants to win them over and secure the job, as it would be a much-needed boost for her fledgling business. But when the groom arrives with his seriously sexy and completely aggravating second in command, instead of his bride- things don’t go as smoothly as she’d like. In fact, her lack of filter may have just cost her the job.
Chase Beauchamp is the second in command of the Crescent City Pack (we got to meet him in Book #1) and a good friend of Luke, the Alpha. He’s incredibly loyal to the pack and his family. They mean the world to him and he’d do anything for them. But his past experiences have left him with an aversion to witches- yeah, he pretty much can’t stand them. So, when he’s obliged to join Luke on a cake tasting session, he’s really not impressed to discover the bakery belongs to a witch. When he meets Rain for the first time, he’s taken aback by how much he is drawn to her. But witches can’t be trusted- can they? Plus, he feels that there is something she’s hiding- and he makes it his mission to discover what it is. As strange things begin to happen, he can’t help feeling protective of her and being anywhere near her causes their chemistry to sizzle.
When bodies begin to pile up and the past comes looking for revenge- will these two survive long enough to find out what fate has in store for them. What happens when Chase discovers her secret? Will he understand, or will his mistrust and hatred of witches cloud his reasoning? Will she take the chance to break the curse that binds her magic, or will she sacrifice everything to save the ones she loves?
As with the first book, this story is quite gripping and suspenseful- with a bit of a ‘mystery’ to try to unravel. There are also some funny moments- witty quips, banter and antics that made me smile/laugh. The chemistry between Rain and Chase was palpable, and there were some very steamy moments to be had between these two! Ms. Pulkinen built the tension and the intrigue superbly. I was hanging on her every word and I definitely had my heart in my mouth for the last few chapters- HOLY MOLEY!!!
Book #3 can’t come quickly enough for my liking!!!! I can’t wait to read Alexis and Bryce’s story… I think it’s going to be epic!!!

Review by @angelahayes
View all my reviews 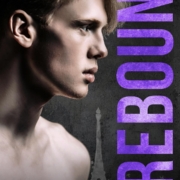 A Protector’s Touch by Parker Sinclair – Review by Lisa Helmick

Who: A Stalker Series Novel by Meghan Mitcham – Review by Gail Guerrero