Fisher of Men by Phoebe Alexander
My rating: 5 of 5 stars

Fisher of Men is the first book in the stand alone Eastern Shore Swingers Series by Phoebe Alexander. This is the second book I’ve read in this series but I’m not new to Ms. Alexander’s work, I’ve started sampling some of her other series! I haven’t met a Phoebe Alexander book I haven’t thoroughly enjoyed yet and Fisher Of Men is no exception.
I read the third book in the Eastern Shore Series first so seeing where it all began in this book was a real treat, I recognized some names- Rhonda, Casey and of course Leah and Cap. By the end of the book I was left craving more and ready to go on with the series.
When you read the about the author segment for Phoebe Alexander it mentions that she writes sex positive, body positive stories and if you’re not familiar with her work yet, this couldn’t be more accurate. Each story I’ve read has had a captivating erotic theme while bringing a great, strong storyline along with it. Each of the characters I’ve “met” so far are strong and stand their ground. Leah was able to discover her true self whether it was in her relationship, sexuality or her faith and I think it shows true talent to have such a balanced storyline where there is no lack of entertainment in any area. So many times you read a book where a woman may not stand her ground right away and once Leah’s mind was made, it was made. In the same respect, Leah is the type of character that can keep a level head and really see things from different perspectives admitting fault when necessary. I really respected her character and look forward to seeing how she grows more throughout the series. As far as the storyline goes, the serendipity tie in this book is what truly sealed the deal for me!
My very first experience with “the lifestyle” and Phoebe Alexander’s writing was in the Juniper Court series book, Project Paradise. While this book has nothing to do with how incredible Fisher Of Men is, it opened me to a new genre of books, led me to this series, and honestly created a new fan of this author.
Reviewed by @fnbates 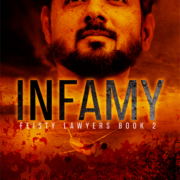