Must Be Crazy by Deborah Garland
My rating: 4 of 5 stars

Must be Crazy by Deborah Garland is the third instalment in the Darling Cove series and follows the story of Skye and Edward.

Skye has worked hard for what she has got in the world, but now her brother and sister have found love the expectation is that she will settle down also. But she has come out of a bad relationship which has left her weary about giving her heart too freely and the question is, is there anyone she could trust with her fragile love, but when her apartment and office goes up in flames within the smoke she meets the most gorgeous man she has ever seen in Edward.

Edward has had his fair share of heart break but unfortunately he has had to carry on regardless as he has a nine year old son to look after so his feelings are pushed deep down. Until her goes to a fire and sees the most beautiful woman, the only thing he question is, is he ready for a new relationship.

The story was full of action and with twists and turns will have you turning the pages and wanting to get to the end of the story. The chemistry between theses two characters jumps of the page and with a little twist in the story will these two people be able to overcome all the obstacles that get stuck in their way to be able to find true love. You will have to read to find out, I have enjoyed the other two books in this series and this one in the series does not disappoint. 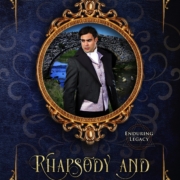 Rhapsody and Rebellion: (Once Upon a Widow) (Enduring Legacy Book 7) by Aubrey Wynne

Beneath the Fallen City (The Omni Towers Series Book 1) by Jamie A. Waters - Review by Jenni Bishop
0 replies

Follow Us!
Only This Tuesday: A Copper Mills Novella by Melissa Keir – Review by... The First Backward Christmas by Brooke Williams – Review by Angela Ha...
Scroll to top