None of us can truly know all we would be capable of until we are driven to it.

When the man Abbey met on Facebook turns out to be anything but the caring, thoughtful and romantic person she thought him to be, she finds herself trapped in his isolated house on the outskirts of a small town in western Nebraska. Despite her overwhelming despair and the chances of her escaping being somewhere between slim and none, Abbey knows she has to get free… Or die trying.

Back home in London, England, no texts or calls from Abbey has alarm bells ringing for her flat-mate. When Abbey fails to make her return flight, Cristina heads to the states to search for her best friend, but where does she even begin to look for her?

A Person Could Disappear Here is a tale of courage in the face of overwhelming odds, never giving up hope, friendship, secrets and lies.

From a small child I’ve loved to lose myself in stories. I’m a firm believer that if heaven exists, it contains every novel ever written and has big squishy sofas to curl up on and read for all eternity.

Before I started writing novels, my comedy play, The Magazine was performed at The Bush Theatre in London, and my poetry has been published in several anthologies. However, I knew what I really wanted to write were novels. With several unfinished manuscripts languishing in the depths of my computer’s hard drive, it was my discovery of erotic romance that led me to ponder what my ideal romantic hero looked like. And thus, Nick Frost was born, and the epic love he shares with Mia spanning three books of Frost Trilogy. Then, after being nagged by my readers, of course I had to write Aiden and Jen’s love story in the FT spin-off, Torn.

After that I delved into the world of full-on erotica, but, as much as I enjoyed writing it, I knew I wanted to write other genres because, along with my hope that if an afterlife exists I can spend mine in a divine library, I’m also a firm believer in not being pigeon-holed. Which is why I made my first foray into literary fiction with A Person Could Disappear Here, because, for me, writing is all about the characters and their story rather than genre.

As English as they come, I believe there’s nothing that can’t be solved, resolved, overcome or celebrated better than with a nice cup of tea. (preferably with a lovely slice of Victoria sponge cake with real buttercream icing) From Rachmaninov (whose piano concertos I often listen to while writing) to Aerosmith, my taste in music is best described as eclectic. And I make a mean chocolate cake. 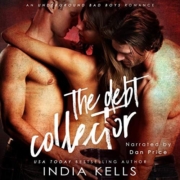 An Italian Adventure (The Italian Saga, #1) by Gaia B. Amman – Review by Francis O’Sullivan

The Woman America Loves a Latte by Holly Tierney-Bedord – Review by Debi...
Scroll to top