Wolf: Book 3 in The Fairy Tale Series by Jody Lynn Daniels
My rating: 4 of 5 stars

“Never trust a stranger-friend
No one knows how it will end
As you’re pretty, so be wise
Wolves may lurk in every guise…”

Wolf is the third book in the Fairy Tale Series by Jody Lynn Daniels. It is a second chances romance, with a military aspect to the story, as well as finding love where you least expect it.
Maggie never expected to have to face the man who she blames for her husband’s death, ever again. She can’t and won’t ever forgive him. So, when she’s forced to spend the next two weeks in his company, she expects it to be quite difficult.
Carson (The Wolf) was Maggie’s husbands commanding officer, but also his best friend. He was hoping Maggie would have let him explain, but she never wanted to listen. Will two weeks change anything?

“The look Maggie gave me hurt worse than the slap to the face, which still stung pretty good. She still blames me for Sean’s death, which she might change her mind if she’d let me explain. But she’d made her mind up years ago and wouldn’t speak to me again about it, there was no talking to her.”

This is a modern take on the popular fairy tale “Little Red Riding Hood”. I am definitely going to go back to read the first two books now, too. I enjoyed the story and the author’s writing style which is descriptive and detailed. There was a lot of emotion infused into the storyline- and I really felt for the character’s and what they had both been through. Maggie and Carson were wonderful, and I was cheering them on the whole way. I loved Abby, she is great- everyone needs an Abby in their life- funny, thoughtful, caring, and loyal.
A great read! 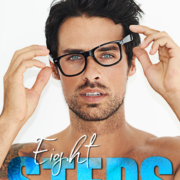 The Chosen: Book One: The Orb Quest Series by Cari Schaeffer – Review by Maura Harper

Baba Ali and the Clockwork Djinn: A Steampunk Faerie Tale by Danielle Ackley-McPhail and Day Al-Mohamed – Review by Jenni Bishop

Follow Us!
Hell on Heels (PJ Santini Series Book #1) by Lynne Russell – Review by... Flesh and Bone (Blood of Kaos Book 3) by Nesa Miller – Review by Krystal...
Scroll to top