The Hazed Series by Brittany Tarkingon
My rating: 4 of 5 stars

The Hazed Series (Books 1-3) by Brittany Tarkington is a college romance with a bad boy. There are three books in one and each one is very emotive. With lots of secrets and lies, pain and suffering, broken hearts and hate, love and understanding. Brittany has done a great job in the world she has created and the characters draw you to them. There is the normal YA angst but with these two characters it goes way deeper. They each have their own demons to struggle with. The first two books are told in the female POV and the third book is told in the male POV.

Taylor has never been allowed to be a normal teenager girl. Her home life has been under the rule of a “preacher”, her father. Now she is in college and out of home she vows that no one will rule her with an iron thumb ever again. When she finds a job there is one person who could threaten her sanity and her heart. All she wants is for him to let her in but sometimes love is just not enough.

Hayze is one person all the girls want, but he is one and done. He has secrets that he won’t share, he draws you in and throws you away, but that doesn’t stop him from getting what he wants. When he sets his eyes on the new girl, his entire outlook on life changes. If only he could give up his ways but he won’t give up the one thing that makes him sane but drives him mad. As much as he realises he is no good for her, he can’t keep away, she is his obsession.

I really enjoyed this series as it wasn’t your normal YA romance college story. I just wanted to wrap Hayze up and sort him out. He wasn’t a bad guy he just has so much baggage to sort through. If you like college romance stories then you will love this one. 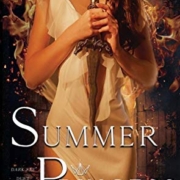 Testament of Feats: Book of Judgement Book One by K.H. Jones – Review by Katie Kearney

The Crown of Stones: Magic-Price by C. L. Schneider – Review by Katie...
Scroll to top