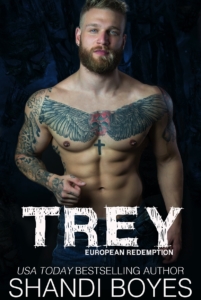 A kaleidoscope is a cylinder full of broken pieces, yet everyone still stares at it in awe. Who’s to say the same can’t be said for women?
Before being thrust in the violent and terrifying sex-trafficking industry, Kristina Svoboda lived in a tiny hamlet in her home country of Czechia. She had an unfulfilling yet peaceful life before she drew the eye of a royal-blooded aristocrat who took what he wanted and lived his life without consequences.
For six years, she’s been beaten, tortured, and exploited, yet her shoulders don’t carry the weight of her abuse. Her heart does, which is exactly what Trey Corbyn plays on when he spots her from afar seconds after she’s released from captivity.
He sees past the frail skin, hollow eyes, and waif-thin exterior.
He sees a survivor.
A woman.
Someone just as broken as him.
With his instincts no longer in existence and his possessiveness dangerous, can a broken man fix a fragilely timid woman? Or will his insecurities worsen her cracks until they reach a point they’ll be unfixable?
Trey: European Redemption is a gritty story about finding love in the darkest of places. It’s raw, intimidating, and shows even when you’ve been beaten to believe otherwise, sometimes dreams do come true. This book has violent scenes that may be distressing to some readers. Caution is advised. It is book seven in the Russian Mob Chronicles, however, it can be read as a standalone. 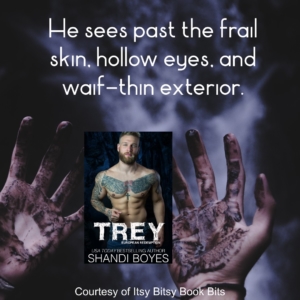 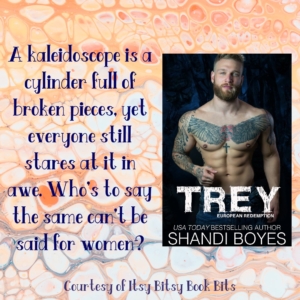 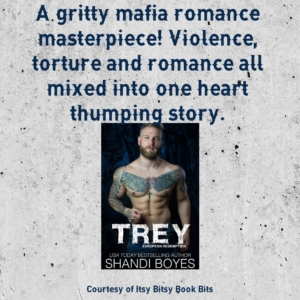 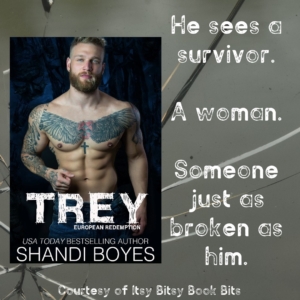 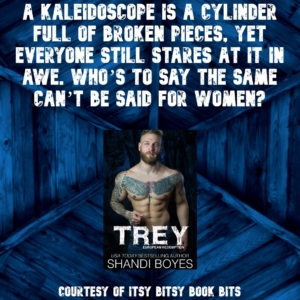 Shandi Boyes is a USA Today Bestselling Author who was an avid reader for many years before she discovered the love of writing in February 2016. Her first penned novel ‘Saving Noah’ is a new adult rockstar romance that will have you sitting on the edge of your seat until the very last word.

In September 2016, her focus shifted to hot alpha men in steamy contemporary reads that sizzle off the pages. Shandi’s novel ‘Enigma’ is an award-winning story about an FBI agent and the subject she was assigned to investigate. Her men are swoon-worthy, devoted, and alpha; and her heroines are strong-willed, determined, and loveable. You should start her stories first thing in the morning, or you may not sleep. You will laugh and you will cry, but Shandi’s characters will stay with you for a lifetime! 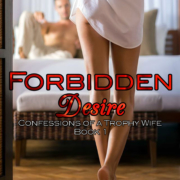