Magic-Scars by C.L. Schneider
My rating: 4 of 5 stars

Malaq tells his brother King Draken that Ian Troy is dead. His death came about due to the collapse of a mine.

Ian Troy was captured and kept prisoner by King Drakens demand. Prisoners are kept at Darkhorne prison which is a bleak and horrifying place and kept under control with a drugs. Troy has lost his memory as a result of the drugs administered to him while he was in prison. He wakes on a ship and doesn’t remember who he is and what happened to him. Troy tries to recover his memories but gets frustrated with how slowly they are returning. As the memories start to return he wonders if it was better not knowing. Troy’s magic use and the effects it has on his body and mind leads him to wonder if he will turn out like his father, a Reth.

Malaq is building a force of people from across the lands who are willing to fight for what they believe in. Troy’s relationships are strained and he struggles to rebuild trust as he blames himself for things that he has done whilst in captivity. He discovers he has many friends, old and new, who are willing to help him as they believe that any hope they have of freedom lies with him. Troy’s quest is to restore power to the Crown of Stones with the help of others but there are consequences for the magic users when they cast.

Troy and his best friend are my favorite characters but I felt anger and sadness by the things that happen to them. This is a fast paced story, that is full of drama, action and magic. I am sure you will enjoy this journey into this magical world. 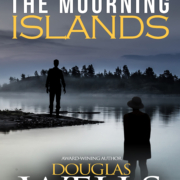 The Mourning Islands by Douglas Wells

Hennessey on the Rocks by Monica DeSimone - Review by Bobbi Wagner

Monty and the Monster by Rhonda Smiley - Review by Katie Matthews