“How many lives did they have left? How many more times could they cheat death? How many days remained on the island for them to survive?”

Coastal Spirit is the third and final book in the Stranded in Paradise trilogy by Lindsay Marie Miller. It’s a great action adventure- with an historical timeline and elements, and suspense, danger, drama, tension, romance and angst. While I have loved this series, as a whole, I did have a couple of minor issues with this book that kept pulling me out of the story and disrupting the flow- which in turn kept me from loving it quite as much as the first two. But I still enjoyed it, and found out how the series concluded!
We jump in pretty much where Island Smile left off. Where the climactic ending left us on tenterhooks wondering how the characters were going to survive the crisis. Henry, Elaine, and Louisa are trying to survive – pitting themselves against the jungle, mother nature, and sinister foes. They have cheated death so many times already, and none of them are sure that their luck would hold out or whether they would finally succumb to all the dangers lurking on the island. We catch up with familiar characters, as well as meeting new ones. Henry, Elaine and Louisa have to try to figure out who they can trust, as well as finding a way off the island, and getting home.
There is quite a lot going on in this story that had me on the edge of my seat. There were some very emotional times, and then there were moments of tenderness, humour, and sheer anger. Some of the push/pull, stubborn pride, and angst, was sooooo frustrating. There were more than a few times where I wanted to shake some sense into them all!
Ms. Miller will continue to be one of my go to authors and I look forward to reading her next book. 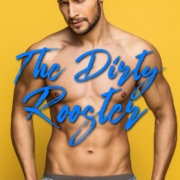 The Unholy by Paul DeBlassie III - Review by Madison Degraffenreid

The Dirty Rooster by Kelly Mooney