Perfectly Played by Holly Kerr
My rating: 4 of 5 stars

“Suddenly I have the urge to run, run away from the chapel and the justice of the peace and what is undoubtedly going to be on the top ten list of all-time worst days. Hiking up the dress I bought off the rack at Nordstrom for forty percent off, I run down the aisle to the lobby, with M.K. and Ruthie hot on my heels.
And then the toe of my shoe really does catch on a loose thread on the carpet, sending me careening right into a man standing in the doorway of the chapel.”

Perfectly Played is an angsty second chance romance by Holly Kerr. The story was quite a clever idea, with lots of drama to keep the tension at a high level. The angst, push-pull, assumptions, miscommunication, and misunderstandings which added to the drama, was quite frustrating. There were several moments where I wanted to shake some sense into both of our MC’s.

Flora Shaughnessy owns her own flower shop, “Fleur”. She’s in Vegas to finally marry her long-time boyfriend. On the way down the aisle, she has a realization that prompts her to turn and run- right into an innocent bystander. Little does she know that fate has plans for them, but right now all she wants to do is find the nearest bar and drown her sorrows. With her two best friends in tow, they begin a wild night that will take them on a bit of an adventure. And Flora will find herself in the arms, and bed, of a handsome stranger- before waking up to an empty bed. But fate isn’t done with them yet. And so the angst, drama, and hilarity ensue.

It took me quite a while to connect with the characters. They were really well developed, interesting and likeable- but the drama, indecision, and miscommunication really made it difficult to connect with them because there was so much of it. I felt that a lot of the drama was added just for the sake of it. For me, the story would have worked even better, with less drama. But having said that, I did enjoy the story, reading it in one sitting just so I could find out how everything tied together in the end. 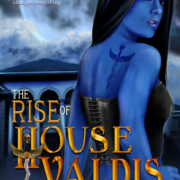 Burning Night: where the ashes of the past awaken the future by Nikki Broadwell - Review By Nicole Alamillo

The Immigrant: An Italian in America (The Italian Saga Book 7) by Gaia B A...
Scroll to top