Murder at Lolly Beach by Jane Suen
My rating: 5 of 5 stars

This time Eve Sawyer is heading on vacation with her friends from college Cassie and Bob at Cassie’s families beach front cottage and cannot wait to just sit back on the beach and relax, eat some good food and read a book, she needs the break after the craziness that was the last semester, and that is exactly how it starts out, they head to the beach and spend some time there before heading out to see Cassie’s grandma.These plans go awry when the next morning when Cassie takes Eve for surprise crepes for breakfast at a local food truck owned by a guy called Blake and when they get there, they find the place surrounded by yellow tape and there are police officers around it, Cassie’s face turned ashen and she looks scared, so Eve goes to see what is happening. As she speaks to a woman in the crowd, she finds out what happened and where the ambulance took him, the need to solve the crime wells up and she knows then and there that she won’t be able to rest until she finds out the truth.

While the Cassie and Eve have something to eat, Eve asks to go to Blake’s house and when they get there, Cassie talks about Blake, the apartment and the people how live below him, but decide not to talk to anyone as the police are doing the exact same thing, so they agree to go back later on. At the hospital they find out that Blake is in a coma and is not allowed visitors, but they are allowed to stand in the doorway and see for themselves and Cassie is shocked at his condition, it is at that moment that a journalist from the local paper turns up, who introduces himself as Jake and asks the same things as Cassie and Eve and as they leave, he follows them out and as Cassie gets in the car, Eve talks to him about Blake and while swapping information tells him why she is there and finds out that as well as being amazing at cooking crepes, Blake is also a strong environmentalist and was trying to get the local council to ban plastics on the beach, but there were a few people opposing it.

When Cassie asks to tag along with him to the interviews of the people who were against the ban, he asks the paper and they agree that she can be an intern while the investigation is ongoing and this is all the encouragement Cassie needs and so the investigation begins.

Will Eve and Jake be able to find out who was responsible for hurting Blake and why, or will the tangled web be too hard a mystery to solve? This is another great murder mystery which will leave you hanging on until you have read to the end and solved it with them. 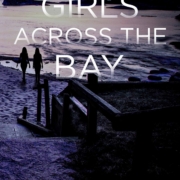 Love is What You Bake of it (The Meraki Series Book 1) by Effie Kammenou – Review by Roxsanne Lesieur.

The Girls across the Bay (The Knox and Sheppard Mysteries, Book 1) by Emerald O’Brien

In Over Her Head: Lights, Camera, Anxiety (The Cecily Taylor Series Book 2) by Krysten Lindsay Hager – Review by Heidi Schoolman