Guardians of the Garden by Theresa Pocock
My rating: 5 of 5 stars

Seth Johnson is a boy who has just been ripped away from everything he knows to travel with his family to the USA so that his sister can receive treatment for her cancer, but when they stop at a diner in the middle of nowhere, he meets someone who says they are a relative, when he has been told that they were all dead and gone and this meeting is about to change his life. Miriam Miller is a girl with violet eyes who is shunned by all of those around her for it, they see her as a freak despite that she is a Guardian, just like they are, but all she wants to do is to go on a sabbatical and explore the world outside of Edenia, however, her family have other ideas and just want to use her ability to keep the village safe and so she can’t leave even if she wanted to and when a new family come into the village, everything is about to change.

When the new family arrive and Miriam observes them through her front window with her family, her first instincts are unease and she has no idea why, however, it could have something to do with the warring reactions of her family members, especially when she realises that one of the newbies has left Edenia before and that it must have been a strong summoning to bring them back. As Seth and his family enter Edenia, he realises that this is where his father grew up, where he was born, but it is so strange to his eyes, there is no technology other than basic appliances and as they go to a meeting with the head of the village, he realises that it will probably be the most boring place, although there is mention of a mysterious garden, but he knows he must learn about it so that he can save his sister and he will do anything to help her. The residents and the new people are all introduced to each other and they all seem as strange as each other, with some being stranger than others but Seth and Miriam feel out of place and awkward, unlike everyone else, Miriam because she is worried about them finding out about their Natures before it is time and Seth because he is worried about his parents intentions for going there, this is compounded as the Johnsons have a family meeting where his parents ask the three kids to try and fit in, seem like they want to become one of them and to just give it a week and then make up their minds, the kids are not happy about this, but agree to go along with it to keep the peace.

As the Johnsons settle in, Seth opens up to his sisters about what he has to do and they agree to try and help him, meanwhile Miriam is trying to come to terms with her Nature and keeping the discoveries she is making about it to herself, but she is also starting to get closer to Seth and feels drawn to him and as time goes on, Seth begins to realise that he is drawn to Miriam as well, however, with all the secrets surrounding them, will they be able to become as close as they want to be, or will their secrets be their undoing? This is a fantasy with hidden depths which will keep you wanting more and needing to know whether they will succeed with their goals in the end. 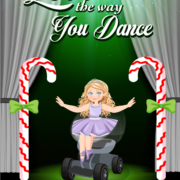 Love the Way You Dance by Allison M. Boot

Depending On You by Jessica Aiken-Hall – Review by Katie Matthews

Thunder on the Moor by Andrea Matthews Review by Ashley McMillon

Follow Us!
Best Of My Love (Love in Emerald Creek) by N.D. Jackson – Review by Liz... Strings Attached: A Braebeach Rock Romance by Loriana Cappello – Review...
Scroll to top