Learning to Live: An Enemy to Lovers Ugly Cry by Kira Adams
My rating: 5 of 5 stars

Ciera and Topher go to the same school and are the same age but they don’t interact much, he is part of the group which bullies her everyday and that means that they were in such different social social circles that he barely even acknowledges her existence. Topher is dating the head cheerleader and he is on the football team, they are the dream couple that everyone wants to either be with or just be, but underneath that perfect exterior, Topher is just going through the motions with her and he also knows that she is cheating on him, but doesn’t care enough to act on it, but when he finds out something a little closer to home, his emotions get the best of him and instead of being numb, he is just angry and in need of distraction. Meanwhile Ciera is always trying to be invisible, she doesn’t look anyone in the eye, or talk to anyone but her best friend and tries to avoid the popular kids as much as possible, she also is trying her best to keep her family’s head above water by working and looking after her siblings when she is not at school but it is at work and at home where she can be more herself. .

As Topher is avoiding going home but knows he has to eventually, he takes notice of the girl who is being tormented by his friends, but he can’t understand her at all, but he also doesn’t care enough to try, although he does notice that she makes eye contact with one person, it is then that he realises that she is intriguing to him. However, Ciera is just trying to avoid him and his friends, but when she goes to the bathroom, she is confronted by two of the popular girls and as usual they just insult her, but this time, they have put gum in her hair and all her pent up emotion escapes, she is then shocked when someone else comes into the bathroom and is actually nice to her, what is more shocking is that it is another of the popular crowd and she doesn’t know how to react to the kindness, apart from to say thank you.

When the next football game comes along Topher goes through the his normal pre game routine, but when he looks over and sees a girl in a yellow sundress he is shocked at his reaction and later on when he sees her at a party, he still cannot believe it, when it turns out it is Ciera. Earlier on that afternoon Ciera got off work early and went to the recommended hairdresser and when her new friend takes her shopping and gives her a makeover, the results are as shocking to her as to everyone else, although when she gets to the party, things do not go as planned and the usual insults fly until she leaves and Topher ends up giving her a lift home, even though he is intoxicated.

As time goes on, Topher can’t seem to keep his distance from Ciera and much to her consternation, neither can she, especially when she gets some news which leads her to decide to live life to the fullest, but will anything develop between her and Topher, or will the barriers between them be too high to overcome? Will Topher be able to learn to live with everything he has found out recently, or will he remain numb to the beauty of the world around him? The only way to find out is to follow along on their journey with them in this emotional rollercoaster which will make you feel everything along with them. 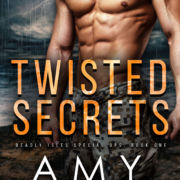 OF WAR AND TATERS by Ashley Chappell – Review by Sheri Schrader

The Inheritance, The Story of an Unlikely Submissive AUDIO BOOK by India Kells – Review by Sunday Barnaby