Face the Fire by Michele Sims
My rating: 5 of 5 stars

As Bella and Miles return in the fifth book in this series, they are still very much in love and their partnership in the business which Miles has created from the ground up and which she is now a partner of as the Chief Marketing Officer, she begins to realise exactly how much work there is to be done while still keeping the love alive and their extended family happy. Meanwhile, Miles has started a new venture within the business and has begin to see even more success from it, but one of the people involved within it starts to put pressure on Miles when they engage in unbecoming behaviour, it increases the pressure he is already feeling.

As Miles and Bella try to schedule their business lives, they are also trying to do the same with their personal lives, Bella is determined to support Miles in everything he does and to help him build this business, but she is feeling the pressure as well and isn’t dealing with it as well as he is. That is until some information passes across Miles’s desk which pertains to a rival company and their competition with Miles, he knows that he is in the right, but he asks for a second opinion, however, nothing is as simple as it seems when trouble starts to brew.

As things heat up and the trouble increases, secrets are revealed on both sides and amid growing concerns that this rivalry between Miles and his competitors is growing despite all their efforts to avoid any confrontation, events conspire against them and the need for increased security around them is a necessary evil and Bella insists that she will do everything she can to keep her family safe, even if it means putting them before the business, she will not hesitate to do this and Miles understands this completely as he has had to put safety before everything before while he maintains his incendiary secrets which could engulf the family in more trouble than anything else.

Escalations increase and it is at this point that Bella fears the worst will happen and she worries that innocent blood will spill and the ramifications of this scare her, but will they be able to go head to head with the competition without the need for unnecessary violence, or will the danger surrounding those they love thanks to their joint success become too hot to handle? This fast paced romantic suspense will hook you in and keep you caught in the current of the rip tide of events as they unfurl with hints of magic and heat throughout, as the power couple work out the best ways to keep their family safe amid a riot of secrets and revelations which ignite the world they have worked so hard to create. 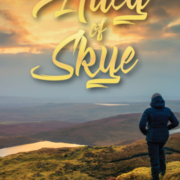 Ailey of Skye by Wendy Hewlett