Scepter Of Fire by L.M. Preston
My rating: 5 of 5 stars

I am truly in love with this world and the characters LM Preston has created the intricacy in which characters from books, 0.5, 1 and 1.5 are consistent. They were introduced in one and each book you learn more things about them that were not known in the previous books. I have read the previous 3 books in this series so far, the 2 from EmVee and now both from Dexter. Once again, the half book Unbreakable Darkness is not required to read before Scepter of Fire, but it helps fill in a lot of the story and plot points. This book picks up where Unbreakable Darkness ends.

Dex remembers the car accident, the family car going off the bridge and hitting the water. He worked to get his siblings free of their seatbelts starting with his older sister EmVee, her friend Kayson appears and pulls her from the water, and then darkness. Waking up in a hospital room held down by chains, he overhears people talking about the hospital is going to be coming down. A doctor comes in and informs him that his older sister and father are on the same floor as him but that they couldn’t save everyone. His goal becomes clear, get his sister out of the hospital. Seeing Kayson, the memories return he pushes him into EmVee’s room and tells him he must get his sister out of the hospital now, and the window is the only option. Kayson is shocked saying they are on the 6th floor when Dex says, “You go this, you’re different. I see it in you.” With a nod Dex leaves, surprises the guards with his strength for a “human” before he is hit with a dart in the neck. Trey, Dex’s elite initiation friend that he saves is bringing him food, in his cell, he attempts to escape and is stabbed by a dagger made from the Scepter Stone. Suddenly a month has passed, Dex gets some cellmates, and mysterious cocoon that Trey reveals is a girl, and a silver haired Siphoner that has escaped from 3 different holding locations. A gift from Trey, befriend him and he will get him and the girl out. But the ultimate shock is learning that the Void is not on Earth. Everyone that was human at one point was stolen from Earth to be the test subjects of a scientist named Sybil.

Will Dex succeed in his mission to be free again? Who is the girl in the cocoon and what makes the Siphoner the most dangerous experiment? The author is not telling the same story over and over again she is enhancing the story, adding layers to it with each new perspective that fills in the holes of the previous point of view. 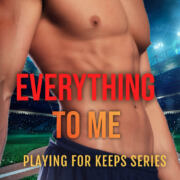 The Girl Who Escaped by Mark Nolan – Review by Jasmin Marie

Everything to Me (Playing for Keeps Book 2) by Lauren Fraser